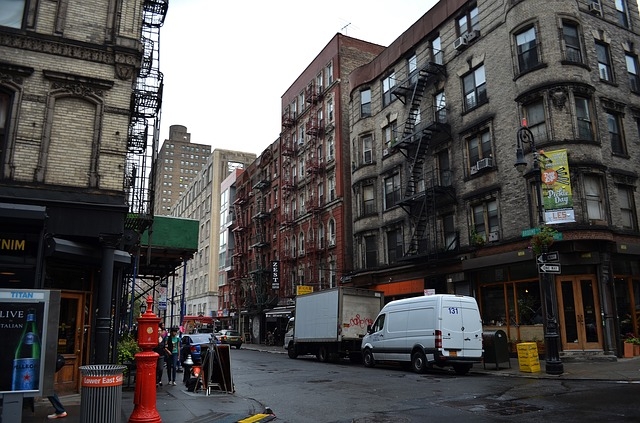 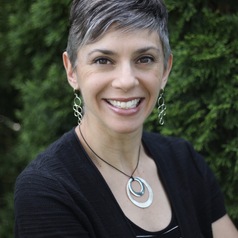 On some normally congested New York City streets, cars are gone, replaced by diners tentatively returning to restaurants – though only outside – after months of lockdown. On June 22, the city entered phase two of reopening after its severe coronavirus outbreak, allowing many businesses to resume operations with restrictions.

Permitting restaurants to spread into streets is one of several pandemic-induced initiatives designed to enable social distancing in this densely packed city. In May, New York launched its “Open Streets” program, which will hand 100 miles of car-free streets to pedestrians and cyclists.

In a city often criticized for letting cars dominate – with deadly consequences – these are fairly dramatic changes. Past efforts to protect New York pedestrians and cyclists have included lowering speed limits, adding crosswalks and creating bike lanes – approaches that “sort” street users into their own spaces but do not fundamentally question the basic organization of city streets.

The pandemic has quieted both pedestrian and vehicle traffic, stimulating a bolder reconsideration of how streets should be used – at least temporarily. As my research on transportation and urban history shows, the city has a long history of considering audacious designs to tame urban chaos.

Between the 1870s and the 1930s, the city repeatedly adjusted to new types of transportation: first the railroad, then the automobile.

Trains, which reached widespread use in the U.S. in the 1850s, allowed people and goods to move further and more quickly than ever before. But speeding through cities they tangled with other street users, resulting in gruesome accidents between horses, carts and pedestrians.

A freight railroad that ran along New York City’s Eleventh Avenue from 1846 to 1941 was so notorious for killing pedestrians that the street earned the nickname “Death Avenue.”

To combat the train hazard, city and business leaders sought to provide separate spaces for different types of street users. Railroad magnates argued for elevating railroads above existing streets, which required no time-consuming excavation. This solution created new problems, including noise, falling embers and the dangers of aerial train accidents.

In 1866, a hat merchant named Genin the Hatter had another idea: elevate people, not trains. Troubled by the dangers of crossing Broadway, he successfully lobbied New York to construct a pedestrian bridge across the wide downtown avenue. But the cast iron footbridge lasted only a year before complaints about aesthetics and shadows compelled its removal.

Such piecemeal solutions could not fully address the complexities of street activity in late 19th-century New York, which already had nearly 4 million residents. But they did pilot some concepts that would reappear in later years – especially when the automobile soon arrived to further complicate urban life.

Cars joined streets already teeming with pedestrians, horses and carts, peddlers, streetcars and elevated railways, with deadly results. New York City documented 354 motor vehicle-related fatalities in 1915 and more than triple that in 1929. In 2019, by contrast, 220 drivers, pedestrians and cyclists died in traffic accidents, according to city data.

Newspapers frequently published editorials about the threat of automobiles. In 1924, The Washington Post called “death by motorcar” a “national menace” while The New York Times compared car congestion to a giant cobra strangling its victim.

City leaders responded to rising deaths by imposing speed limits, restricting parking and creating one-way streets. These changes, largely made in the late 1910s and 1920s, began to systematize the street chaos.

But throughout this period, creative architects, engineers and citizens were thinking bigger. In op-eds, books and journal articles, they proposed a wild assortment of designs questioning basic assumptions about how cities should work.

Some designs moved New York’s sidewalks to make more room for vehicles. These proposals included an elevated promenade along the Hudson River, sidewalks hung from the second stories of buildings and sidewalks that ran through their ground floors so that adjoining streets could be widened. More high-tech ideas envisioned building six-level streets or creating futuristic blimp and airplane networks accessed by elevator-served platforms. One proposal imagined adding highways and moving walkways to rooftops. 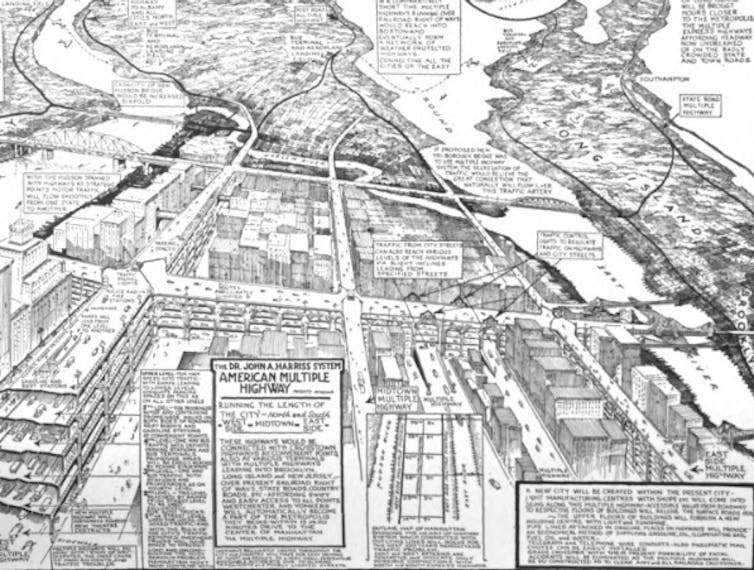 A 1927 proposal for stacked avenues in Manhattan. The American City/Hathitrust

New York architects Hugh Ferriss and Harvey Wiley Corbett fused aspects of many of these ideas in a series of utopian writings and exhibits during the 1920s. The cities of their dreams had regularly spaced modern skyscrapers topped by rooftop gardens, all connected by multilevel streets and aerial pedestrian walkways.

From dream to reality

While none of these proposals came to fruition, they eventually informed some real projects in New York.

The West Side Elevated Highway, constructed between 1927 and 1937, combined the earlier idea for a riverside pedestrian promenade with the need to address congestion around Manhattan’s shipping piers. Its elevated path from Canal Street northward sped cars for four miles above the chaos of local streets, while its street-level Art Deco decoration provided a new sleek waterfront identity. It was torn down in the 1970s.

Rockefeller Center, though, remains standing. Built in the 1930s, this development reordered 22 acres of midtown Manhattan, arranging skyscrapers, a performance venue, shops and restaurants around one central plaza. With multilevel pedestrian connections between spaces, it realized portions of Corbett and Ferriss’s ideas.

The still-popular High Line unites two periods in New York’s transportation history. Built in 1934 as an elevated freight railroad, it closed in 1980 and was left to decay. In the early 2000s, the city revitalized the High Line as a garden-laden, aerial promenade that weaves between buildings and above streets, recalling the utopian plans from a century ago.

These are all precedents for New York’s current effort to transform its streets. Like banishing cars from some streets, many past ideas seemed exceedingly unlikely before they happened. The coronavirus pandemic has paused this bustling city long enough to again reframe what residents need to survive in a time of great change.