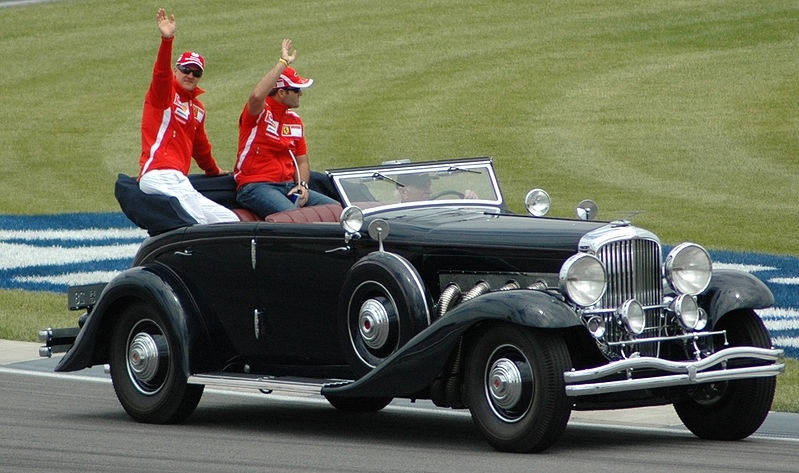 Michael Schumacher and Rubens Barrichello at the 2005 US Grand Prix | Photo by Rdsmith4 [CC BY-SA 2.5 (https://creativecommons.org/licenses/by-sa/2.5)], via Wikimedia Commons

Michael Schumacher’s wife, Corinna Schumacher, has not spoken to the media for years after the Formula One champion met a tragic accident in 2013. However, the release of a personal letter she wrote somewhat provided fans with a rare update on the retired racing driver.

Though it has been years since Michael Schumacher’s last F1 racing event, many fans around the world still look up to him as one of the best race car drivers ever. It is not surprising that many of these fans are continuously sending messages of support to the Schumacher family. And a very unique gift from one fan convinced Corinna Schumacher to write a personal thank you note.

In the letter shared by Herchenbach, Michael Schumacher’s wife reportedly wrote, “We all know Michael is a fighter and will not give up." And as expected, Corinna Schumacher will not break her top rule of not letting a word out about the health recovery of the retired F1 driver.

Meanwhile, Herchenbach admitted to being surprised upon receiving a letter of appreciation personally written by Michael Schumacher’s wife. “The letter was handwritten and signed by Corinna on her stationery. She wrote that she was very thankful for the gift and helped her and her family over this difficult time,” Herchenbach also told Bunte.

As mentioned, Michael Schumacher met a skiing accident in December 2013 while on vacation with his family. He was then placed in a medically-induced coma for the following months while his family stressed their request for privacy. Unfortunately, with Michael Schumacher’s F1 status and popularity, there were still individuals who wanted to exploit the media attention over his accident and recovery.

In June 2014, Michael Schumacher’s manager Sabine Kehm confirmed that purportedly stolen medical documents were put up for sale. Kehm had also advised the public that they will press charges over “the purchase and the publication of such documents.”