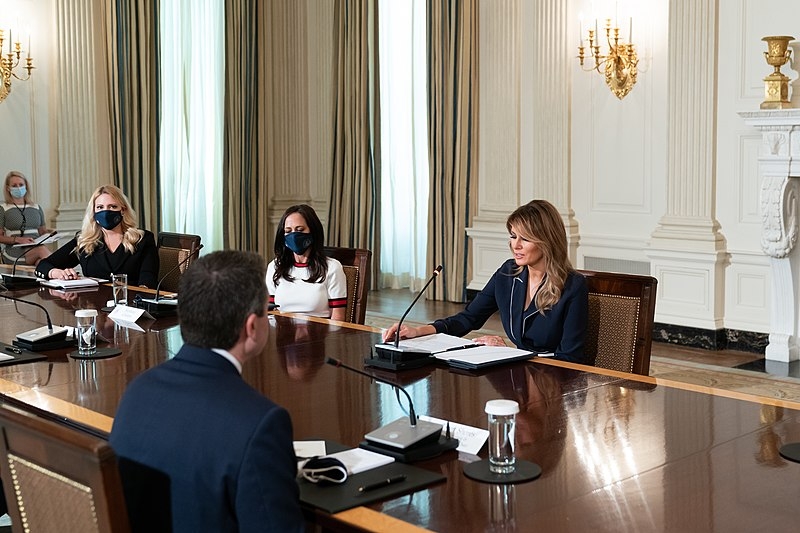 First lady Melania Trump is easily known for being one of the more lowkey first ladies, often choosing to focus on being a mother to her son Barron Trump. However, she has recently made herself more and more visible, especially so during the pandemic and even as the country is in the midst of reopening. But compared to her husband, Donald Trump, a body language expert says that Melania often becomes a “counterpoint” to her husband through her actions and behavior.

Mrs. Trump’s confidence has evidently grown over the years as the first lady. According to body language expert Judi James, Melania may be helping her husband through her contrasting approach to public appearances. Speaking to Express, James explained that the first lady’s habit of “striking the perfect pose and sustaining it” suggests a more prepared or planned approach compared to Donald, who is more spontaneous in communicating with people.

James expounded on their contrasting approach, saying that while Donald is someone who tends to use gestures, Melania is more subdued and hardly does so. “While his thoughts tend to appear visible in his body language running commentary, Melania’s are still more hidden, allowing voters to project more positive assumptions,” said James.

The expert also pointed out how Melania’s confidence has grown since becoming more visible as the first lady to the public. James shared how Mrs. Trump has become comfortable in taking on a leadership role, noting that in an office visit, the first lady would be seated at the top of the table seat, which is usually where people in executive or business leader-type positions like her husband usually sit.

Meanwhile, back in 2017, a comment allegedly made by General John Hyten suggests that the first lady is a lot smarter and was a lot more knowledgeable about military operations than her husband. According to notes made by retired Colonel Kathy Spletstoser, Hyten ripped into Trump for his lack of an understanding of national security.

Hyten added that the president only tends to view things from a business standpoint and that making a profit is the most important thing. The General went on to say that at one point, Trump wanted to sell nuclear-powered submarines to the South Korean army, but he reportedly talked him out of it and explained why it was a bad idea.