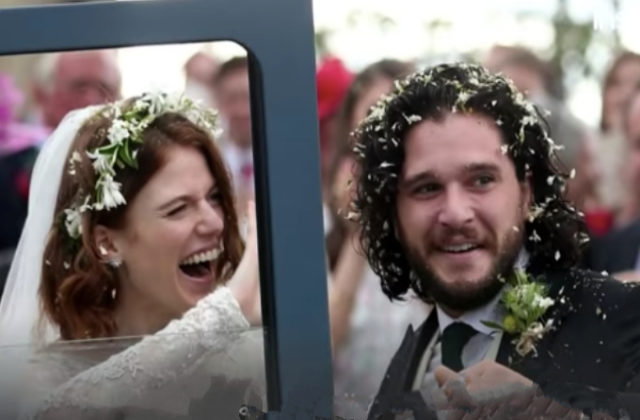 Kit Harrington and Rose Leslie fell in love on the set of “Game of Thrones” season 2. The pair appeared on the fantasy drama as Jon Snow and Ygritte, and although the actress was only on the show until the fourth season as her character was killed off in 2014, they continued their romance outside of the “GoT” set.

“Because the country is beautiful, because the Northern Lights are magical, and because it was there that I fell in love,” Harington told Entertainment Tonight when asked how they started dating. “If you’re already attracted to someone and then they play your love interest in the show, it becomes very easy to fall in love.”

Their first breakup as a couple

Two years into their relationship, Harrington and Leslie broke up in 2013, but they quickly reunited after three months. They got engaged in 2017 and tied the knot on June 2018.

The pair always appear on the red carpet together since becoming husband and wife. They seem so perfect for each other, and Kit Harrington often gushed about how good it is to be married to Rose Leslie.

But despite their seemingly great marriage relationship, recent news revealed that the couple is allegedly headed for divorce. According to NW Magazine, Harington and Leslie have been experiencing problems since the former checked in at the rehab in May.

UK’s Metro reported that the actor checked himself into rehab as he knows there is something he needed to fix in his life. The actor’s rep confirmed that he has indeed entered the rehab and cited stress and personal issues as the reasons for his decision to get professional help.

“Kit has decided to utilize this break in his schedule as an opportunity to spend some time at a wellness retreat to work on some personal issues,” the rep said.

NW went on to state that the rehab decision caused the split of Kit Harrington and Rose Leslie. “Rose didn’t like the arrogant person he’d become,” s source alleged. “She hoped once the show ended, things would improve, but they didn’t.”

To get an accurate answer, Gossip Cop spoke with the actor’s spokesperson, and they were told that the story is false. He added that the truth is - Kit Harrington and Rose Leslie remained happily married, and she is supporting her husband as he faces struggles.