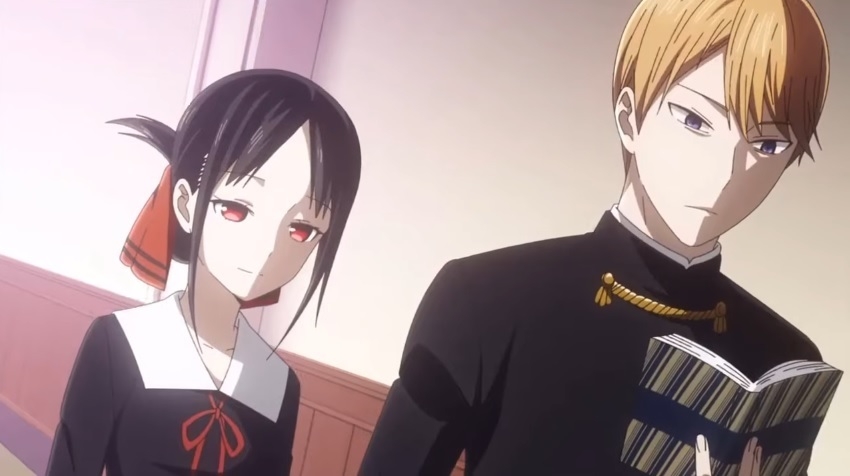 With the production of “Kaguya-sama: Love Is War” season 3 now confirmed, fans can start speculating on how the romantic-comedy story will progress between Kaguya Shinomiya and Miyuki Shirogane. If there is one thing manga readers know, that is the coveted confession between these protagonists is almost happening soon.

The second season of the anime was filled with relentless mind games more complicated than in the first season. But fans saw how both of the characters’ feelings developed for each other. Kaguya even had to be brought to the hospital because of lovesickness at one point. So even without reading the manga, the anime left fans with enough clues that Miyuki and Kaguya’s relationship is headed to a confession.

Aside from their love confession, fans will also find the main protagonists dealing with developments in other aspects of their lives. “Kaguya-sama: Love Is War” season 3 should include the arc where Shirogane gets a chance to study abroad since this was also important to build up the events leading to their confession in the manga.

Of course, the road that will lead to the much-awaited confession will be filled with awkward, funny, and confusing moments that often involve people around Kaguya and Miyuki. But if the anime’s pacing will not change in “Kaguya-sama: Love Is War” season 3, the next installment should cover the chapters where the student council organizes another cultural event.

At this point, Miyuki plots a complex plan that he hopes will force a confession out of Kaguya in “Kaguya-sama: Love Is War” season 3. They will, however, mutually decide to drop the charades and confess.

It is important that they confess to each other at the same time. It can be recalled that one of the main reasons this tale of mind games began was they both believe the person to confess their feelings first becomes inferior in a relationship.

Unfortunately, the announcement of “Kaguya-sama: Love Is War” season 3 production did not come with other details such as the studio handling the animation and its release window. It is still possible for the new episodes to arrive in 2021, but a later premiere next year cannot be ruled out for a good reason.

The “Kaguya-sama: Love Is War” season 3 announcement also confirmed that the franchise is getting its first event original video animation. The OVA is confirmed to premiere in 2021.