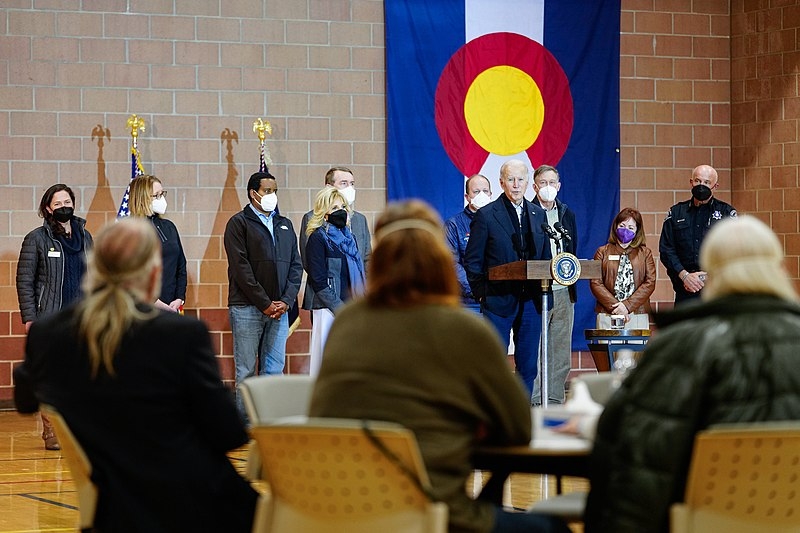 Last week, a town in Denver, Colorado, was struck by a wildfire in the midst of the winter season. US President Joe Biden traveled to the devastated area to meet with the residents who lost their homes from the incident.

Biden, along with first lady Dr. Jill Biden, traveled to Colorado Friday last week to survey the damage caused by the wildfire in a community in the Denver area. The Bidens also met with the residents whose homes were destroyed by the fires. They also spoke briefly with the emergency workers present.

Two people were missing and feared dead from the calamity. Human remains that are believed to be of one of the two people missing were recovered Wednesday.

The Marshall Fire destroyed more than 1000 homes between December 30 to 31. This is the most destructive blaze in Colorado in terms of property losses. In Boulder County, the prairie grass fire near Denver burned more than 6,000 acres and hit two towns – Louisville and Superior.

This is Biden’s second trip to Boulder County, Colorado as president, as well as the second trip that focused on wildfires. The Bidens were joined by Colorado Governor Jared Polis and three congressional delegates from the state. The US leader declared the latest incident a national emergency, releasing federal funds for recovery efforts.

Biden’s Build Back Better proposal would make investments towards forest management, firefighting, and efforts to lower carbon emissions. The bill has since passed the House on party lines and has yet to pass the evenly divided Senate.

Last week, Biden also spoke to commemorate one year since the January 6 Capitol insurrection. The US leader spoke at the Capitol, where he condemned his immediate predecessor Donald Trump for continuously peddling his false election fraud claims. Biden also accused Trump’s allies of trying to subvert democracy in a bid to stay in power.

Biden also warned that the lies and conspiracies that incited the riots are still rampant to this day, calling Trump a “defeated former president” whose “bruised ego matters more to him than our democracy or constitution.”

“For the first time in our history, the president had not just lost an election, he tried to prevent the peaceful transfer of power as a violent mob reached the Capitol,” said Biden in his remarks. “But they failed.”