USD/CNY unlikely to show big movement for the time being, says Commerzbank

FxWirePro: Vols & Risk Reversals Perspectives for AUD Ahead of RBA

FxWirePro: Bearish/Bullish Driving Forces of NZD/JPY And Hedging Perspectives Ahead of RBNZ 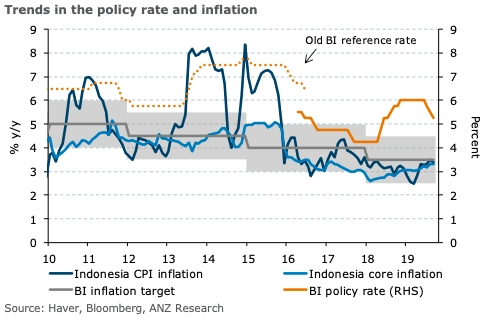 On a sequential basis, headline CPI fell by 0.27 percent m/m in September, the first decline in seven months. The decline was led by food prices, which fell by 1.97 percent.

Most other major categories — such as housing, clothing, healthcare and education — saw prices rise further, but at a slower pace compared to the previous month.

Core CPI, which excludes volatile food and government-controlled prices, rose by 0.29 percent m/m in September, slower than the 0.43 percent gain seen in August. In y/y terms, core inflation edged up to 3.32 percent, the highest since February 2017.

The bottom line is that both headline and core inflation are likely to stay comfortably within the central bank’s 2.5-4.5 percent target band and will not prevent BI from easing monetary policy.

"We continue to see scope for at least one more 25bp cut in BI’s easing cycle, which will take its policy rate to 5.00 percent by end-2019," the report further commented.