How 'bling' makes us human 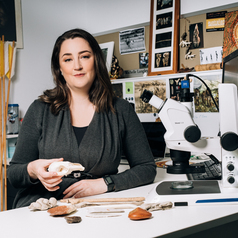 In 2017 Australians spent A$28.5 billion on ornamenting themselves with clothing, cosmetics, and accessories.

But this obsession with decorating our bodies isn’t just a trivial activity. Archaeological evidence shows us it’s actually a large part of what makes us human.

Why jewellery is important

Why do we spend so much on decorating ourselves? In short, it’s because we use bling to communicate.

For example, consider engagement rings. It’s well understood in many countries that a sparkle on the ring finger of the left hand means that the wearer is engaged to be married. That ring sends a particular message.

How we use our ‘bling’ to send messages. Drawn by M. Langley

Indeed, everything we wear is sending messages. We are all familiar with phrases such as “power suits” and “statement pieces”. The items we choose to wear tell those around us who we are: professionals, athletes, doctors, artists, mothers, and so on. Some choices are conscious, others not so much – but nevertheless everything we wear is telling a story.

When I talk publicly about the use of bling by people, audience members often bring up the case of satin bowerbirds. The male of this species builds an intricate bower before decorating it with blue objects. 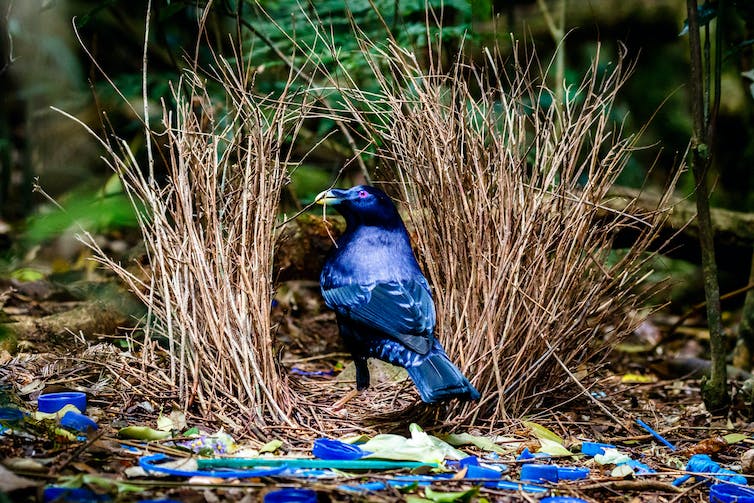 The Satin Bowerbird collects blue objects to decorate his bower – but it’s not symbolic behaviour.

But how is this seemingly artistic behaviour any different to what we humans do?

The short answer is abstract thought.

The bowerbird and the pufferfish are focused on attracting a mate. Their message is simple: “I’m here and I’m healthy.” There is no conversation about how they should send this message – they just … do it.

Our messages – those we humans are sending through our bling – are coded using agreed symbols (like a diamond ring) which we decide stands for something else (“engaged to be married”).

This process of agreeing amongst ourselves that a certain thing can stand for something completely different is what makes us human. And jewellery has been central to this unique ability for hundreds of thousands of years.

Decorating our bodies: expanding our minds

For archaeologists, finding body adornments is the closest thing to finding prehistoric thought. Their first appearance in the archaeological record tells us when the human mind had become sophisticated enough to conceive of individual identities.

Originally, humanity lived in small groups that were spread out across the landscape. Everyone knew everyone, and interactions between complete strangers were a rare occurrence.

Growing populations, however, led to an increasingly complex social world in which we didn’t know every individual personally. This meant we needed to start telling people who we were.

So, we began wearing certain things to send messages regarding our personal status (available, married, leader, healer) and group affiliations.

This use of body decorations enabled humans to continue expanding our communities, which lead to more complex behaviours and more complex minds. 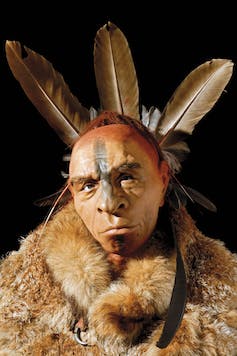 The earliest evidence for bling is red pigments – mineral earth ochres – which were used as body paints by modern humans (Homo sapiens like ourselves) some 285,000 years ago in Africa.

Interestingly, it appears that not long after (around 250,000 years ago), Neanderthals were doing the same thing in Europe.

However, body paint only lasts for so long – until you wash, it rains, or it simply wears off. It has a time limit.

Beads, on the other hand, can last for generations. This ability to be used and reused significantly outweighs the time and energy it takes to make them – and by at least 100,000 years ago, people both needed and recognised the advantages of beads.

Around this time, people in Africa and in Israel were seeking out tiny white shells called Nassarius, punching a hole through their surface so they could be strung, and using them alongside red body paint. 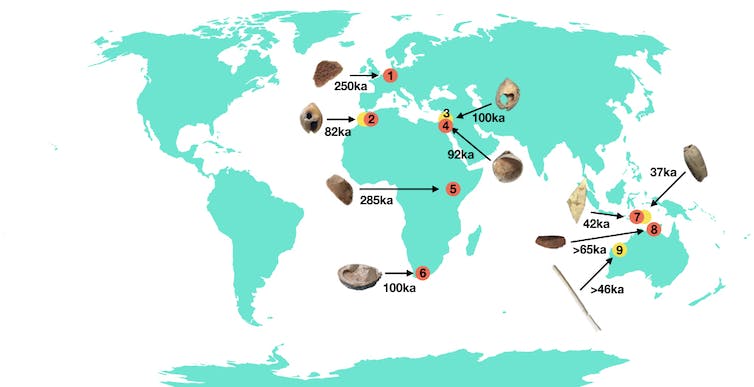 It is not an accident that the oldest beads are made from seashells: they come in shapes we like (round), colours we like (white/cream/black), and are shiny (we like this a lot). Small shells are also hardy, being able to withstand being jolted or dropped (useful).

What’s more, they can be worn in a wide variety of ways – allowing us to transmit many different messages. 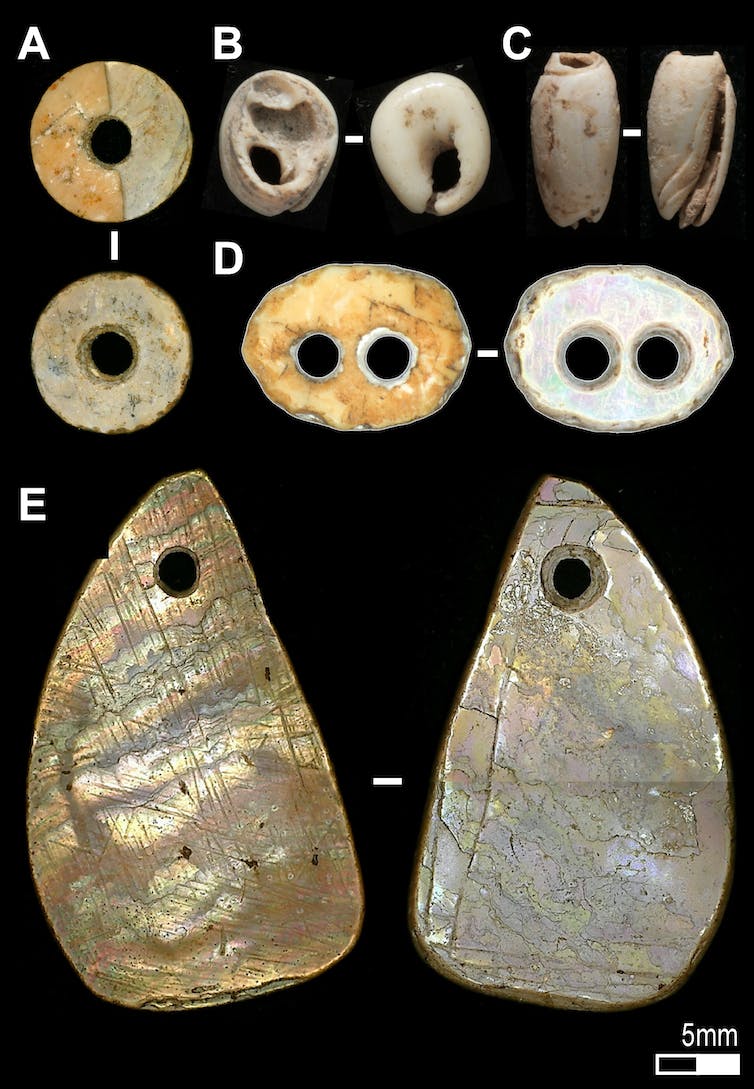 Shell beads such as these were made in Southeast Asia from at least 42,000-years-ago. Image: M. Langley

What’s more permanent than beads? Inserting ink into the dermis layer of the skin – also known as tattooing.

Sculptures from Europe suggest that tattooing may have an antiquity of at least 30,000 years, though the earliest indisputable evidence for tattooing is currently the Tyrolean iceman commonly known as “Ötzi”.

The victim of murder some 5,300 years ago, Ötzi sports some 61 skin markings. Similarly aged are two predynastic Egyptian mummies, while a younger, spectacular example is a 2,500-year-old Siberian princess.

Tattooing also has an impressive history throughout the Pacific, inspiring modern practices while simultaneously passing on ancient stories.

The significance of traditional Pacific tattooing.

For us, more bling in the archaeological record indicates more interactions. Traded bling tells us who was talking to whom. And new types of bling reflect changed circumstances.

All bling is valuable because it tells us something about the person who wore it.