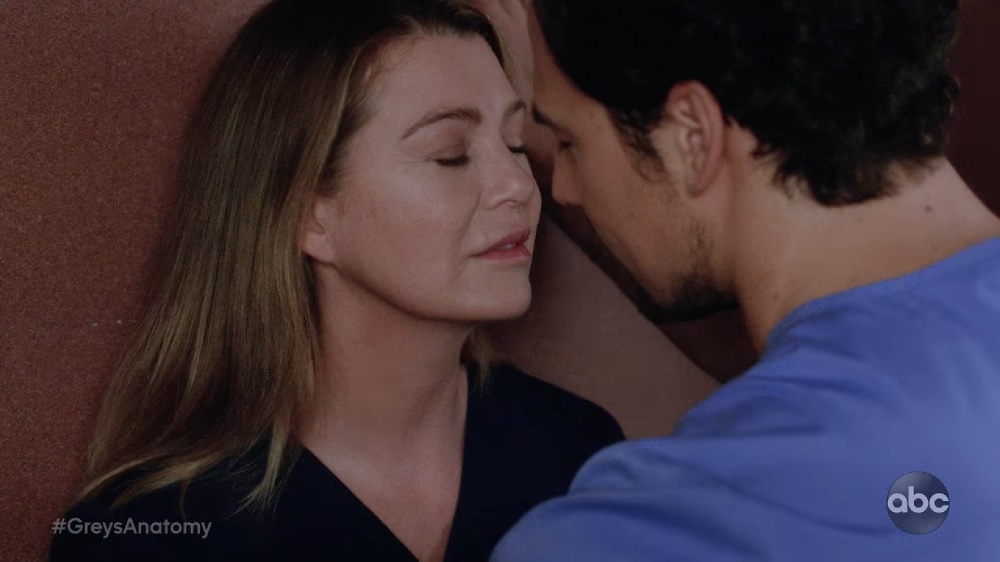 The love tension between Meredith (Ellen Pompeo) and DeLuca (Giacomo Gianniotti) is one of the most talked about plotlines in “Grey’s Anatomy” season 15. Are they going to make their relationship status official? The latest promo video seems to suggest they will.

It has been two months since TV fans saw a new episode of “Grey’s Anatomy” season 15. When the Pompeo-led show returns this week, the story picks up just moments from where the mid-season finale last November ended. This means Meredith is still stuck in an elevator with DeLuca shortly after she practically rejected his confession of love.

However, a snippet of the “Grey’s Anatomy” season 15 episode 9 promo video shows Meredith and DeLuca will keep their hands busy amid the power outage. The teaser shows Mer and DeLuca in a seemingly steamy encounter as the latter says, “Remind me again why this is such a bad idea for us.”

The obvious assumption would be that Meredith and DeLuca will no longer hold back their feelings for each other. But, considering Mer’s very intimate dreams at the beginning of “Grey’s Anatomy” season 15, this could also be just a product of her or DeLuca’s imagination.

Meanwhile, fans can expect a lot more drama when “Grey’s Anatomy” season 15 returns this week. The love triangle of Teddy (Kim Raver), Owen (Kevin McKidd), and Amelia (Caterina Scorsone) were also stuck together in an elevator during the power outage. Owen decides to address Teddy’s pregnancy, but the promo video cuts before fans can get a hint at how Amelia takes the news.

One of the biggest surprises of “Grey’s Anatomy” season 15 is Teddy’s pregnancy. She learned she’s having a baby with Owen when he was already rebuilding his relationship with Amelia. The show returns on Thursday, Jan. 17, at 8 p.m. ET on ABC.