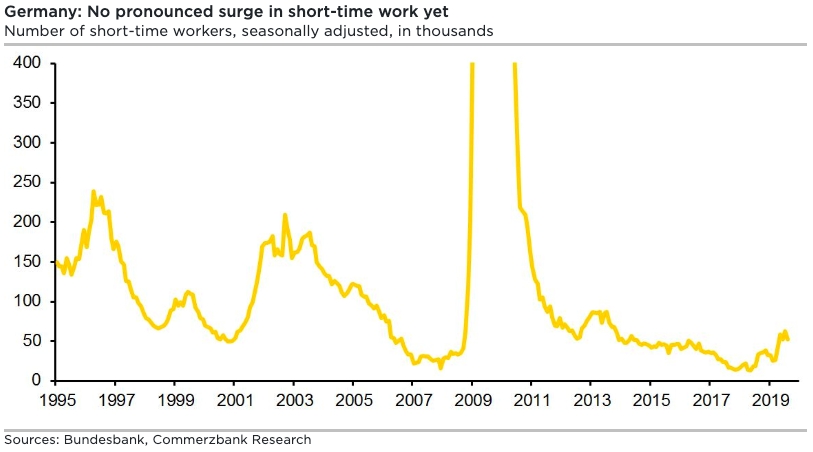 The German labour market is expected to continue to defy the recession in the manufacturing sector, according to the latest research report from Commerzbank.

Working time accounts that are full to the brim and generous regulations on short-time workers' pay constitute effective buffers that prevented a slump in employment even in the severe recession of 2009.

All of this is a counterweight to a bursting of the globalisation bubble, from which the German export industry will suffer for a long time to come.

German industrial production has been contracting for almost two years. This manufacturing recession caused German GDP to decline somewhat in the second, and probably also in the third, quarter.

Despite this, the German labour market is still in good shape - even in areas where companies are most likely to act in a downturn. Despite the recent increase in the number of short-time workers, their numbers are not significantly higher than the average of the past five years, at just over 50,000, the report added.

In addition, the number of reported job vacancies is still close to its all-time high of summer 2018, and the number of regular employees (those subject to social security contributions) has until recently continued to increase, albeit at a slower pace.

Meanwhile, the only clearly negative labour market indicator is the declining number of temporary workers, who are usually the first to be laid off in the event of an economic downturn. However, temporary work is only falling primarily because of regulatory measures that came into force in April 2017, Commerzbank further noted in the report.