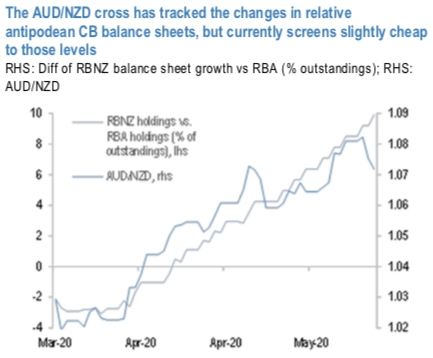 Our NZD optically suffered a setback this week as Governor Orr pushed back on the prospect of negative rates. This underscores what is still a fluid situation in terms of global policy responses to the crises, though by most metrics NZD continues to screen as one of the most vulnerable currencies to QE given the RBNZ's largest-in- class asset purchase program and overt willingness to provide direct funding for the government’s large-scale borrowing needs. But with negative rates deferred until at least 2021, this actually raises the likelihood that the RBNZ is forced to deploy the other remaining tools at their disposal. This includes foreign asset purchases, which the bank recently formalized as a potential option. We reckon for a rapid 5% dip in NZDUSD if the RBNZ goes ahead with this. This could be an option at the MPC meeting at June but this could also be front- loaded in the case of near-term firmness in the currency, which helps keep our downward bias intact.

Moreover, as a partial RV play versus AUD, the cross now appears slightly cheap to what the relative pace of asset purchases might otherwise imply (refer above chart). This has been the second week that the RBA has declined to purchase any bonds, while the RBNZ Governor continues to argue for a flatter and lower sovereign yield curve and they are continuing to purchase $450m of bonds three times per week. This offers some room for retracement in the cross if the relationship reasonably continues to hold.

Alternatively, on hedging grounds we advocated shorting AUDUSD futures contracts of mid-month tenors, we wish to uphold the same strategy as the underlying spot FX likely to target southwards below 0.65 levels in the medium run (spot reference: 0.6750 levels). Writers in a futures contract are expected to maintain margins in order to open and maintain a short futures position. Courtesy: JPM & Westpac