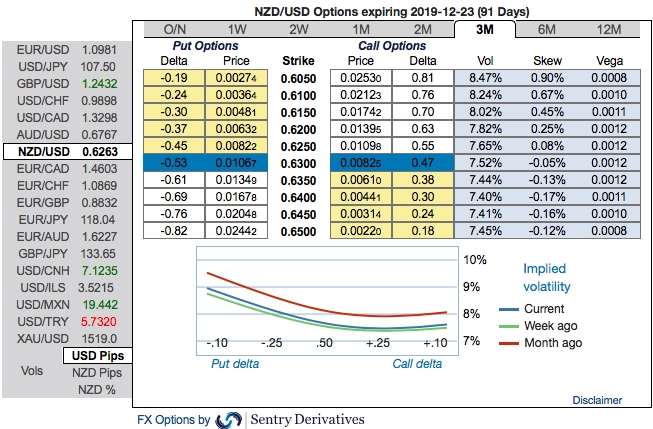 The medium-term perspectives:  The RBNZ has demonstrated its willingness to take bold steps, which means markets are likely to remain dovishly positioned for some time. In contrast, the Fed is more measured, which means the NZ-US yield spread is likely to weigh on NZDUSD.

In addition, slowing global growth and trade wars will be headwinds. All this suggests further downside potential for NZDUSD, our month-ahead target 0.6050.

Most importantly, 3m IV skews are also in sync with the NZD’s bearish projections that have clearly been indicating downside risks. Hence, the major downtrend continuation shouldn’t be panicked the broad-based bearish outlook amid any abrupt rallies.

The global risks are reckoned to play less conducive for NZ than they do for Australia, and the central bank has reason to be credibly dovish even as the data have outperformed some of the downside risk scenarios laid out earlier in 2018. NZD is expected to depreciate to 0.60 by year-end, accordingly we deploy suitable options strategies.

While the NZDUSD trade is underwater following positive news reports on a US-China agreement. The erratic nature of news flow is one reason why we had suggested NZDUSD shorts via options in the past that with ITM put instruments which are most suitable amid prevailing conditions. 3m NZDUSD (1%) in the money put options have been advocated, in the money put option with a very strong delta will move in tandem with the underlying.

The trade projection is now out of the money but we maintain exposure given tail risks to high beta FX as noted earlier. Courtesy: Sentrix & Westpac