FxWirePro: Hedging Perspectives of Kiwis Dollar Ahead of RBNZ 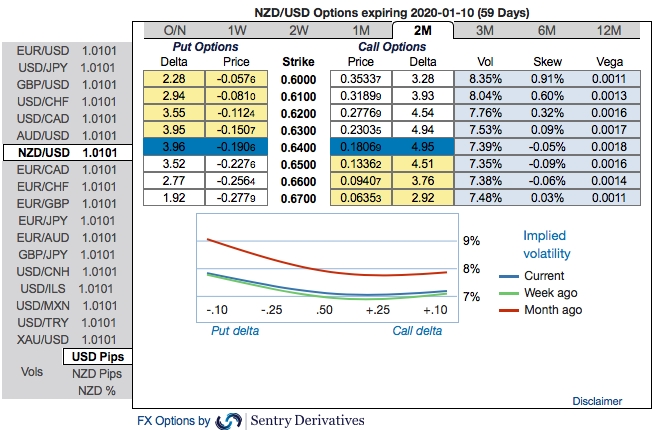 The RBNZ is scheduled for their monetary policy this week, the market pricing for RBNZ implies a 60% chance of easing on 13 November, with a terminal rate of 0.70%.

The kiwis central bank cut 50 bps in its August meeting and had said that there was room to cut further "if required." We interpret this as an easing bias rather than a signal. In other words, the RBNZ views a cut as more likely than a hike, but is not committing to either at this point.

They have demonstrated its willingness to take bold steps, which means markets are likely to remain dovishly positioned for some time. As discussed in our recent posts, we now think the odds favor the further RBNZ rate cut the OCR to a new low of 0.75% in November. Combined with easing from other central banks, that should push NZ swap rates to fresh record lows.

Hence, we reckon that any abrupt rallies of NZD would be momentary, NZDUSD is expected to depreciate towards 0.60 levels by year-end.

The medium term perspectives: The RBNZ decision this week would be influential near term, but beyond that, the US dollar would be key. Earlier this month saw the USD firm with rising yield spreads, but over the next few months we expect global trade tensions to be the main driver of USD strength.

Let’s now quickly glance through OTC updates before deep diving into the strategic frameworks of NZDUSD. The pair is showing moderated IVs among G10 FX bloc (3m IVs are in between 7-8%).

Contemplating above fundamental factors and OTC outlook, diagonal debit put spreads are advocated to mitigate the downside risks with a reduced cost of trading.

Alternatively, we advocated initiating longs in NZDUSD futures contracts of November’19 delivery as further upside risks are foreseen and simultaneously, shorts in futures of December’19 delivery are the most important for the major downtrend.

Thereby, one can directionally position in their FX exposures. The directional implementation of the same trading theme by further allow for a correlation-induced discount in the options trading also if you choose strikes appropriately. Courtesy: Sentry & Westpac