FxWirePro- CHFJPY (chart of the day) 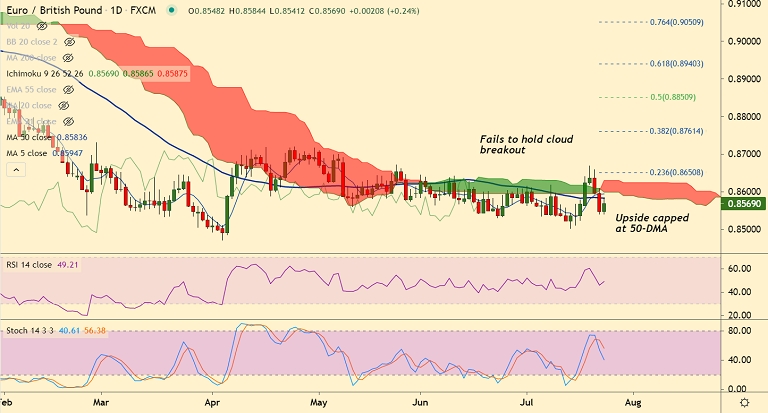 Upside was capped at 50-DMA which is offering stiff resistance at 0.8584, decisive break above to see further gains.

Major trend in the pair is bearish. Recovery failed to extend break above daily cloud.

The IHS Markit Eurozone Composite PMI expanded further to 60.6 in July vs. 60.0 expected and 59.5 prior.

German Manufacturing PMI rose to 65.6 in July, while  the services PMI came in at 62.2 for the reported month as against 59.1 estimated.

The headline UK Retail Sales recorded slightly better-than-expected growth of 0.5% in June. While the core sales figures increased by a modest 0.3% during the reported month.

Summary: Better-than-expected PMIs lend support to the single currency and help offset dovish ECB-led weakness. However, bearish technical bias weighs on the pair. Scope for test of trendline support at 0.8510 ahead of 110-month EMA at 0.8474.