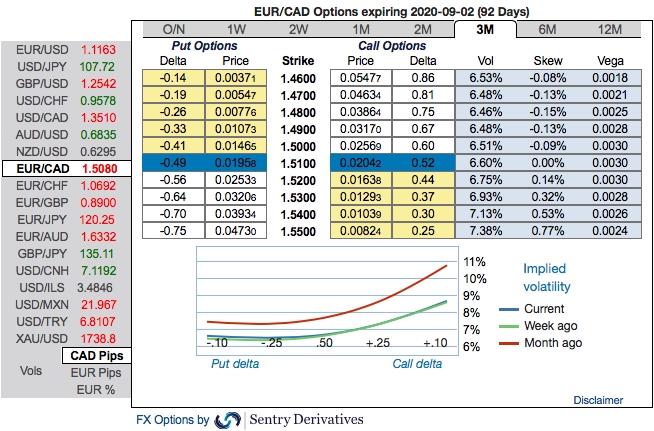 The recent euro stability belies in its structural vulnerability to more debt & less growth, EUR, against majors, is uniquely susceptibility to a sharp increase in public sector debt levels due to the uneven debt burden within the region and the absence of a mechanism, and indeed seemingly still the political will, to effect material fiscal transfers that would put the sustainability of high-debt, low-growth countries beyond question. While we are listing out some important driving forces of EURCAD in this write-up and suggested suitable hedging vehicles.

1) A second Covid-19 wave that does further damage to public finances.

4) UK leaves the EU at year-end with no trade deal.

6) The COVID-19 downturn is a true v-shaped recovery.

1) Political progress towards debt mutualisation and/or more significant fiscal transfers as part of the recovery plan.

2) All countries tap the ESM facility and the ECB stands ready to activate the OMT facility.

4) The UK extends its transition period for Brexit beyond end-2020.

While positively skewed IVs of 3m tenors of EURCAD contracts have also been indicating upside risks, bids for OTM Calls are on high demand as the hedging sentiments for upside risks are intensified (refer above nutshell).

Because of the comatose state of currency markets at present, CAD option risk premia appear oblivious to the fallout of this high stakes standoff. EURCAD risk-reversals in particular appear too complacently priced: at zero across the curve, they are well discounted to already low USDCAD risk-reversals (3M 0.35, 1Y 0.7), and under-priced relative to even tepid recent realized spot- vol correlations (SABR implied 6M spot-vol corr. in EURCAD r/r 1% vs. trailing 1m spot-vol corr 15%).

BoC and ECB monetary policies are scheduled for this week and they are most likely to maintain status quo at this juncture.

The underlying price of this pair has slid a bit and has further downside potential in the near-terms but major uptrend remains intact.

Hence, 3m (1%) +0.70 delta in the money call option seems to be the most suitable strategy for EURCAD contemplating some OTC sentiments and monetary policy events.

Alternatively, we advocate shorts in EURCAD futures contracts of June’2020 delivery with a view of arresting abrupt price slumps and simultaneously, add longs in futures July’2020 on hedging grounds for potential resumption of the major uptrend. Thereby, one can directionally position in their FX exposures. The directional implementation of the same trading theme by further allow for a correlation-induced discount in the options trading also if you choose strikes appropriately. Courtesy: Sentry & JPM