Should new Australians have to pass an English test to become citizens?

From irreverence to irrelevance: the rise and fall of the bad-tempered tabloids 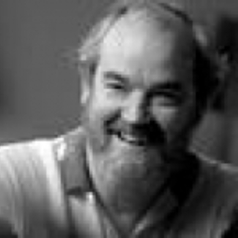 “Kick this mob out” shouted the front page of The Daily Telegraph on the day that Tony Abbott triumphed in the 2013 federal election. Restraint and modesty have never been the hallmarks of tabloid newspapers. Sometimes they celebrate what they claim is their impact – most famously when the London Sun proclaimed “It’s The Sun wot won it” after the 1992 Conservative victory.

But it is a long time since any tabloid newspaper could plausibly claim such a role because their reach has shrunk so markedly. In 1972, the biggest-selling newspaper in Australia was The Sun News Pictorial in Melbourne, with a daily circulation of 648,000. Its stablemate, the Melbourne Herald, was the biggest-selling afternoon newspaper with 498,000.

Sure, business models changed, but so did the tabloids’ temper

This is a stunning story of commercial decline and failure. Of course, over the past two decades, all major media have had their business models challenged by the digital revolution. But the decline of newspapers in relation to population had already been going on for several decades, partly because the first source of news for most people had become radio and television. My guess is that tabloid newspapers are the least likely of all legacy media to thrive in the digital age.

Beyond the changing technologies, where tabloid newspapers are on the wrong side of history, at least part of the reason for their decline is the changes in their own product. Viewed over decades, we can see how these papers, and especially those owned by Rupert Murdoch, have been on an editorial trajectory that is self-defeating and has added to their decline. Compare the Herald Sun of 2019 with the Melbourne Sun of the early 1970s.

One of Australia’s most distinguished journalists, Adrian Deamer, the first successful editor of The Australian until Murdoch fired him in 1971, later a senior legal adviser to Fairfax newspapers, had once been an editorial executive at The Sun. In the 1980s, he told me:

The Sun was extremely competent in its coverage of news. It was short and sharp, limited background. The Sun was then a serious tabloid, not like the Sydney afternoon newspapers. Its news covered the same things as The Age but sharper. It had a very wide, comprehensive coverage of the news, although it didn’t disregard trivia. It knew Melbourne better than any other paper knew its city. It presented Melbourne to Melbourne. It was very close to its readers. A remarkable association.

Tabloid newspapers are much less close to their readers now. One indicator suggesting this is how human interest news has changed. My research showed that in The Sun/Herald-Sun and Daily Telegraph, human interest stories covering “ordinary people” comprised 10% of all stories in 1956 but only 3% by 2006. Entertainment-related and celebrity stories had grown from 3% to 12% in the same period.

Perhaps there were changes in public demand, but equally it was much cheaper to feed off the spin of the entertainment industry than invest in the reporters necessary to engage with community news.

The columnist as outrage machine

Perhaps the clearest sign of change is in the papers’ major columnists. For more than a decade, The Sun’s columnist was Keith Dunstan. His “A Place in the Sun” was marked by warmth and humour, eloquence and lightness of touch.

Today their major columnist is Andrew Bolt. Bolt is the highest-profile person to have been convicted of breaching Section 18C of the Racial Discrimination Act in an error-filled article full of bile against his Aboriginal targets.

Recently, Paul Barry on Media Watch called out some of Bolt’s Islamophobia

And if our politicians will not speak frankly and protect us from Islam, watch out for a civil war. A frightened public will not put up with this for much longer, and will defend themselves. (15-7-2016)

On March 25 this year, ten days after the massacre, his headline was:

Christchurch: Do the Greens have blood on their hands?

The default setting for Bolt and his fellow columnists is outrage. There is rarely consideration, let alone appreciation, of contrasting views. Rather there is dismissal of climate “warmists”, political correctness, the left and so forth. Waging culture war is their core business. 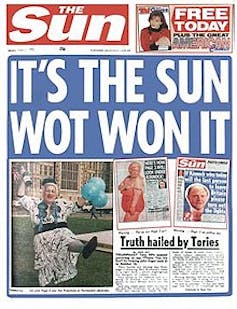 The London Sun famously boasted of its electoral clout in 1992. Wikicommons

Today’s tabloids are the result of a long editorial trajectory. Murdoch’s London Sun is often blamed for many of the sins of modern tabloids. It had the page three girl, was irresponsible in much of its reporting, and full of marketing gimmicks. But that paper for most of the 1970s, under Larry Lamb, had a refreshing cheekiness and humour. After another decade under Kelvin Mackenzie, the humour was gone. Its politics and its view of the world were consistently nasty.

Perhaps there was a marketing logic to this. Its main competitor in circulation, the Daily Mail, set out on a similar course denigrating racial minorities, calling for more punitive approaches to crime, and denouncing those it disagreed with.

Paul Dacre’s last memorable front page before he ended his 26-year reign as editor was about the Supreme Court judges who ruled that the executive government had to get parliamentary approval for Brexit. The story screamed: 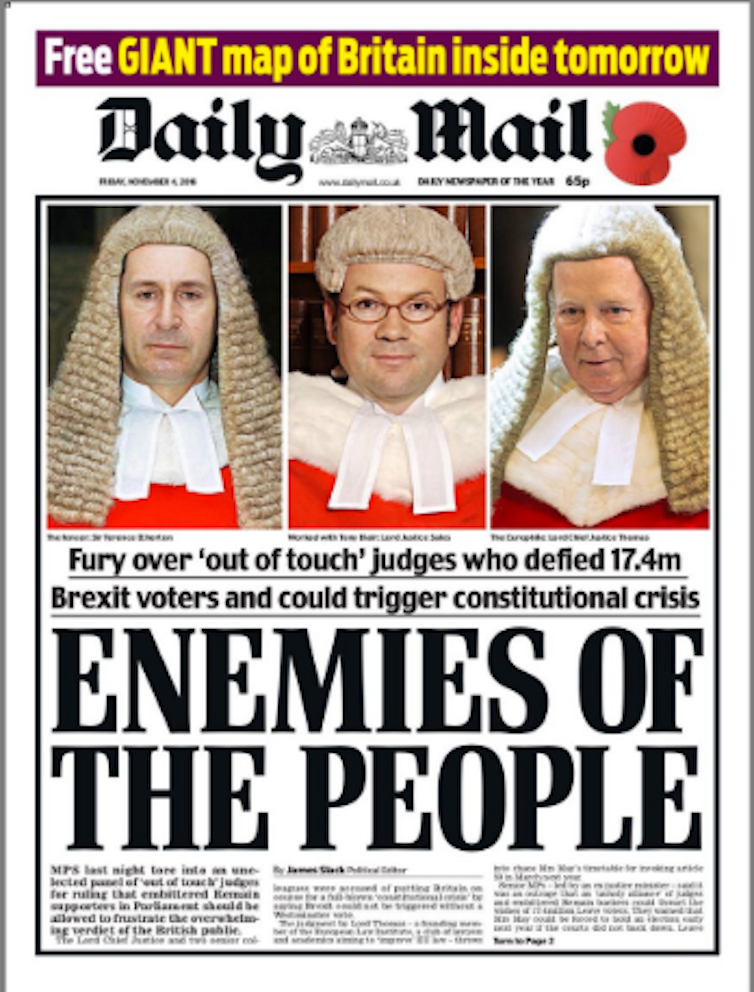 You’re either with us or against us

Polarisation runs through the way tabloids frame the news – between triumph and disaster; heroes and villains; common sense and absurdity. These papers offer their readers certainty and simplicity rather than ambiguity and complexity; they give them the opportunity to vent their anger at the modern world.

We should not romanticise the old Herald and Weekly Times newspapers. Their editorial outlook was rooted in a smug conservatism. Their international coverage was simplistic and stereotyped. They were unresponsive to emerging issues on the political agenda – including feminism, multiculturalism, environmentalism and consumerism. They were indifferent to many of the injustices in society.

But there was a tolerance and occasionally a generosity of spirit that is markedly lacking in their successors. Moreover, they believed in honest reporting. This in addition to their large audiences which gave them a political relevance today’s tabloids lack.

Probably the most important journalist in the Canberra press gallery during the Whitlam government was Laurie Oakes, working for the Melbourne Sun. It is impossible to imagine any Murdoch tabloid reporter having that centrality today.

Bill Shorten, unlike his predecessors Kevin Rudd and Julia Gillard, has recently been reported as deciding not to have dinner with Rupert Murdoch in New York to pay homage. This is a sound political judgment. Very few swinging voters are reading the Murdoch tabloids.

The papers are so set in their anti-Labor ways that there is little prospect of meaningful change in their news coverage. Moreover, the anti-Labor diet has been so constant that if the readers have not yet been persuaded to go against Labor it is hard to imagine what future coverage will make them do so.

Much of their coverage of the coming campaign can be anticipated. There will be unflattering photoshops of Labor or Green politicians. Each day will bring either a triumph for the government or starkly presented disasters and scandals for Labor and the Greens. But shrillness should not be mistaken for relevance.

For a long time, the tabloids have given up trying to engage with the range of views in a pluralistic and dynamic society. Instead they have practised ghetto journalism, catering to an aged, monocultural, alienated constituency.

Commercially, this is the equivalent of a political party knowing it is bound for defeat trying to save the furniture. Politically, it means their coverage is full of sound and fury, but signifying almost nothing of electoral relevance.