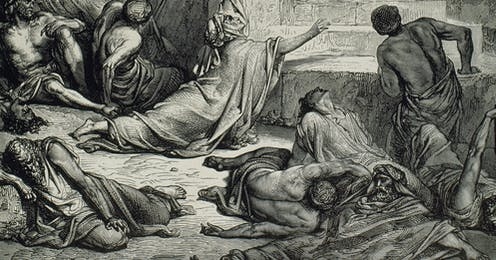 The famine in Samaria was one of many depicted in the Bible. PHAS/Universal Images Group via Getty Images 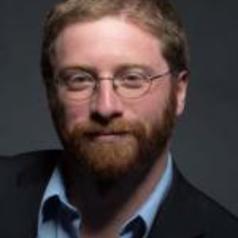 As the coronavirus spread rapidly around the world last year, the United Nations warned that the economic disruption of the pandemic could result in famines of “biblical proportions.”

The choice of words conveys more than just scale. Biblical stories of devastating famines are familiar to many. As a scholar of the Hebrew Bible, I understand that famines in biblical times were interpreted as more than mere natural occurrences. The authors of the Hebrew Bible used famine as a mechanism of divine wrath and destruction – but also as a storytelling device, a way to move the narrative forward.

When the heavens don’t open

Underlying the texts about famine in the Hebrew Bible was the constant threat and recurring reality of famine in ancient Israel.

Israel occupied the rocky highlands of Canaan – the area of present-day Jerusalem and the hills to the north of it – rather than fertile coastal plains. Even in the best of years, it took enormous effort to coax sufficient sustenance out of the ground. The rainy seasons were brief; any precipitation less than normal could be devastating.

Across the ancient Near East, drought and famine were feared. In the 13th century B.C., nearly all of the Eastern Mediterranean civilizations collapsed because of a prolonged drought.

For the biblical authors, rain was a blessing and drought a curse – quite literally. In the book of Deuteronomy, the fifth book of the Hebrew Bible, God proclaims that if Israel obeys the laws, “the Lord will open for you his bounteous store, the heavens, to provide rain for your land in season.”

Disobedience, however, will have the opposite effect: “The skies above your head shall be copper and the earth under you iron. The Lord will make the rain of your land dust, and sand shall drop on you from the sky, until you are wiped out.”

To ancient Israelites there was no such thing as nature as we understand it today and no such thing as chance. If things were good, it was because God was happy. If things were going badly, it was because the deity was angry. For a national catastrophe like famine, the sin had to lie either with the entire people, or with the monarchs who represented them. And it was the task of prophets and oracles to determine the cause of the divine wrath.

Famine was seen as both punishment and opportunity. Suffering opened the door for repentance and change. For example, when the famously wise King Solomon inaugurates the temple in Jerusalem, he prays that God will be forgiving when, in the future, a famine-stricken Israel turns toward the newly built temple for mercy.

The Bible’s association of famine and other natural disasters with divine anger and punishment paved the way for faith leaders throughout the ages to use their pulpits to cast blame on those they found morally wanting. Preachers during the Dust Bowl of 1920s and 1930s America held alcohol and immorality responsible for provoking God’s anger. In 2005, televangelist Pat Robertson blamed abortion for Hurricane Katrina. Today some religious leaders have even assigned responsibility for the coronavirus pandemic to LGBTQ people.

In the book of Samuel, we read that Israel endured a three-year famine in the time of David, considered Israel’s greatest king. When David inquires as to the cause of the famine, he is told that it is due to the sins of his predecessor and mortal enemy, Saul. The story illustrates how biblical authors, like modern moral crusaders, used the opportunity of famine to demonize their opponents.

For the biblical writers interested in legislating and prophesying about Israel’s behavior, famine was both an ending – the result of disobedience and sin – and also a beginning, a potential turning point toward a better, more faithful future.

Other biblical authors, however, focused less on how or why famines happened and more on the opportunities that famine provided for telling new stories.

Famine as a narrative device – rather than as a theological tool – is found regularly throughout the Bible. The writers of the Hebrew Bible used famine as the motivating factor for major changes in the lives of its characters – undoubtedly reflecting the reality of famine’s impact in the ancient world.

We see this numerous times in the book of Genesis. For example, famine drives the biblical characters of Abraham to Egypt, Isaac to the land of the Philistines and Jacob and his entire family to Egypt.

Similarly, the book of Ruth opens with a famine that forces Naomi, the mother-in-law of Ruth, and her family to move first to, and then away from, Moab.

The story of Ruth depends on the initial famine; it ends with Ruth being the ancestor of King David. Neither the Exodus nor King David – the central story and the main character of the Hebrew Bible – would exist without famine.

All of these stories share a common feature: famine as an impetus for the movement of people. And with that movement, in the ancient world as today, comes vulnerability. Residing in a foreign land meant abandoning social protections: land and kin, and perhaps even deity. One was at the mercy of the local populace.

This is why Israel, at least, had a wide range of laws intended to protect the stranger. It was understood that famine, or plague, or war, was common enough that anyone might be forced to leave their land to seek refuge in another. The principle of hospitality, still common in the region, ensured that the displaced would be protected.

Famine was a constant threat and a very real part of life for the ancient Israelite world that produced the Hebrew Bible. The ways that the Bible understood and addressed famine, in turn, have had a lasting impact down to the present. Most people today may not see famine as a manifestation of divine wrath. But they might recognize in famine the same opportunities to consider how we treat the displaced, and to imagine a better future.

Yale Divinity School is a member of the Association of Theological Schools.