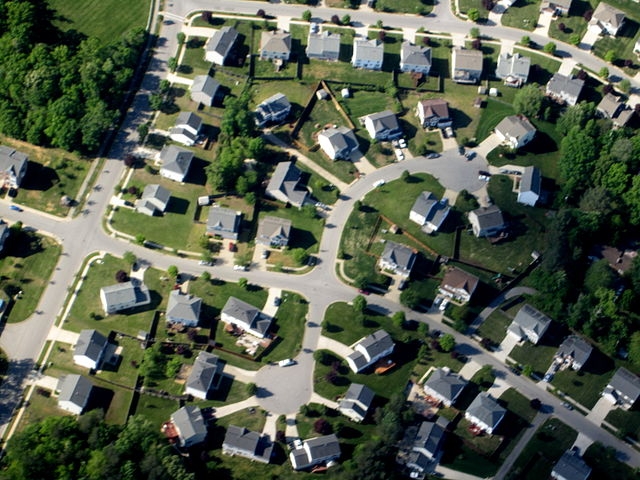 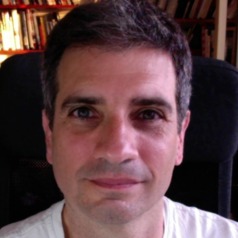 In the first presidential debate Donald Trump asserted that if Joe Biden were elected, “our suburbs would be gone.”

In his campaign rallies, Trump has repeatedly accused the Democrats in general, and Biden in particular, of wanting to “abolish” and “destroy” the suburbs. On August 11, he stated:

“They want to put low-cost housing in the suburbs, and that would mean abolishing, ruining the suburbs. It has already begun. It’s been going on for years.”

In a tweet, he addressed suburbanites by associating their lifestyle with the “American dream”, and “low-income housing” as a nuisance, echoing the myth that impoverished Americans are somehow undeserving of assistance.

Trump was referring to his administration’s abandonment of a provision of the 1968 Fair Housing Act, signed by President Lyndon Johnson, and strengthened under the Obama administration. The provision is intended to protect Americans from illegal housing discrimination and thus promote integration. The regulation conditioned the receipt of federal funds on the removal of barriers erected by local zoning, particularly a requirement to build single-family homes, which necessarily excludes multi-unit housing.

In his speeches and other communications, the president has presented himself as the “savior of the suburbs” and the American dream. To understand Donald Trump’s strategy, we must first take a brief historical look at the American notion of the suburbs.

The original sin of the suburbs

The term “American suburbs” conjure the image of a solid middle-class or well-to-do population, mostly white, who live almost exclusively in single-family homes with landscaped yards. Suburbs began to be developed after World War I, when cars started to become more available, but are most associated with the period following the World War II. It was then that the federal GI bill, enacted in 1944, which provided a range of benefits to demobilized soldiers, including education and housing. Financial support from the federal government and the accessibility of cheap land outside city centers led to the creation of new housing models that came to symbolize the “American dream”, such as Levittown.

It is important to note that the creation of these new residential areas is also intimately linked to the racial discrimination that existed at that time both in the south and in the north. With Blacks moving from the south to escape discrimination and find work, in turn many northern whites sought to leave urban centers, a phenomenon known as “white flight”.

As research has found, Blacks often found themselves systematically excluded from the suburbs through individual and institutional discrimination, including real estate, banking and federal laws. In The Color of the Law, published in 2017, historian Richard Rothstein demonstrates that housing segregation was a result of government policy at all levels – federal, state and local. The Levittowns were the most famous suburban subdivisions in history and served as models for other suburbs. They were symbols of both the “American dream” and American discrimination. The first was built in 1947 and was originally open to whites only. Even today, Blacks make up only 1% of the current population. Housing discrimination, in the suburbs as well as inner cities, was not the result of pure market forces. Instead, it was designed into the system.

An end to discrimination?

The passage of the Fair Housing Act in 1968 reduced housing discrimination. According to demographer William Frey, it helped reduce this type of discrimination by approximately a third between 1970 and 2010. Today, 55% of the US population lives in areas that could be considered suburbs, including about a third of ethnic minorities. Despite the fact that 45% of US residents live in rural or urbanized areas, many consider the United States to be a “nation of suburbs”.

Behind these figures lies an even more complex reality. Academic research has found that [urban areas also have forms of segregation], that racial segregation is taking new forms and that forms of “white flight” still persist](https://www.sciencedirect.com/science/article/abs/pii/S0049089X17305422). Forms of segregation within suburban communities, between suburbs, where people of different “races” live continue.

In 2019, Ben Carson, secretary of state for Housing and Urban Development since 2017, criticized zoning that imposed single-family homes. He asserted that it made housing “too expensive” and exacerbating the homelessness crisis. In August 2020, however, he asserted the exact opposite in an opinion article published the Wall Street Journal. It was co-signed by the president and titled “We will protect the suburbs.”

Trump claims that abandoning the Affirmatively Furthering Fair Housing Act (AFFH) will protect American freedom. The irony is that the AFFH Act was itself a deregulation designed to relax zoning rules and allow for the free construction of low-cost housing.

Citing the city of Westchester, New York as an example, Trump constructs a binary narrative that contrasts the “beautiful” suburbs with “cheap housing” that “comes with a lot of other problems, including crime.” The Westchester version of the suburbs is one he knows well since he owns several properties there and has been sued more than once by the federal government for violating existing desegregation policies. Trump’s own father was sued repeatedly by the federal government for discriminating against Blacks. One can therefore understand “low-cost housing” as “housing occupied for people of color” even if, in reality, many whites benefit from it.

Donald Trump contrasts his idealized vision of the suburbs as bucolic safe havens with the harsher view of large Democrat-led cities as places of violence, riots and corruption:

Here he is drawing from an American founding myth, already present in Jefferson, that contrasts cities (places of vice) with rurality (places of virtue). This sanitized vision of “small-town America” has given way to the idealized American suburb, illustrated by the association of the suburbs with domesticity, beauty, and personified in the vulnerable housewife, in need of protection. In an interview with Laura Ingraham on Fox News, he said: 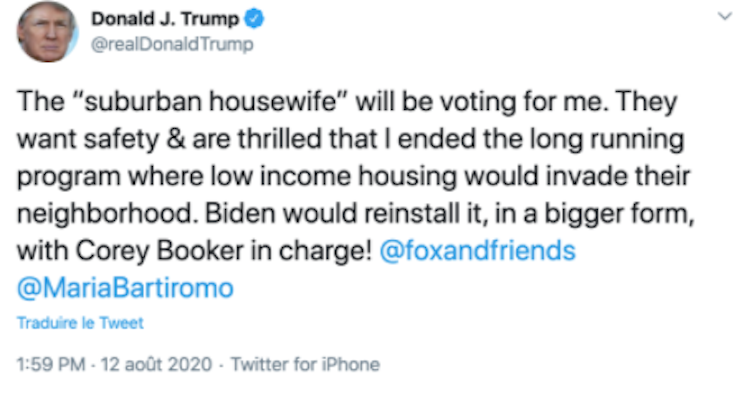 The very term housewives is an anachronism that harkens back to the 1950s. Its pejorative connotation within modern feminism makes it all the more attractive to Trump, who sees in it a symbol of an era when America was great because people knew their role and place within the hierarchy.

All this is part of a campaign strategy based on the theme of “law and order” that aims to arouse the fear of conservatives who still dream of an idealized (necessarily) white America, that they believe existed before the upheavals of the 1960s, before the era of civil rights and feminism. The 1968 Fair Housing Act, strengthened under the Obama administration, was intended to ensure that all communities, including the suburbs, are more diverse. That is not “destroying” the suburbs and it is certainly not “abolishing” them.