Gold gains as dollar weakens ahead of Fed policy meet

Euro strength inconsistent with the comprehensive ECB package, an overreaction, downside to resume 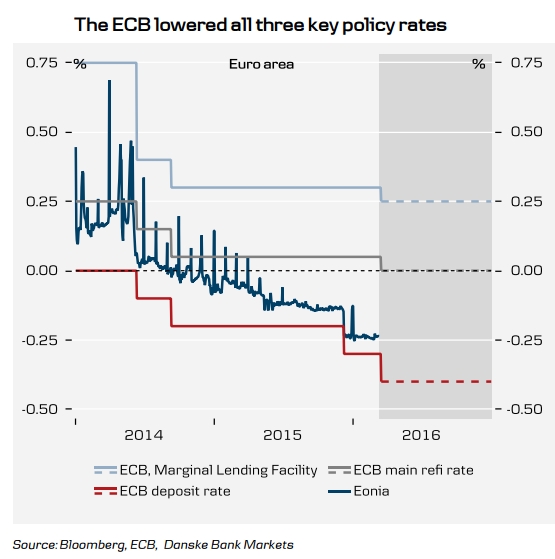 The ECB fired its bazooka yesterday, and undoubtedly a powerful one, yet markets were unimpressed. As expected, the ECB cut its deposit rate by 10 basis points, further into negative territory to -0.4%. The marginal lending rate, paid by banks to borrow from the ECB overnight, was cut from 0.3% to 0.25%. The ECB expanded its QE programme to €80bn (£61bn) a month, up from €60bn. The QE programme will now include buying bonds issued by companies and not just by financial institutions.

"Having mislaid his bazooka in December, Mario Draghi has returned to the fray firing a blunderbuss. While superficially impressive, this scattershot approach will probably have limited impact on monetary conditions and the economic outlook," said Simon Ward, chief economist at Henderson Global Investors.
The immediate effect was as intended, bond yields fell, euro slipped, Pan European blue chip index EuroStxx50 was up more than 3.5%. But following president Draghi's presser, sentiment started reversing. Euro strengthened sharply after the statement, which after initial drop closed deep in the green against Dollar. Euro suffered heavy swings intraday, about 396 pips against the dollar yesterday, biggest since ECB's Dec disappointment and 3rd biggest since 2008/09 crisis.

The main trigger yesterday for the sharp strengthening of the euro was the statement from President Draghi that he doesn't anticipate it will be necessary to cut rates further which prompted the market to scale back expectations that rates are likely to be lowered deeper into negative territory. Draghi went on to say that the Governing Council discussed the option of introducing a tiered deposit system but decided against it as it was viewed as too complex and they didn't want to signal that there was no lower limit for rates, which further dampened expectations for rate cuts.

"The ECB attempted to exceed market expectations with a strong set of non-conventional monetary policy measures but then disappointed the market on forward guidance around further interest rate reductions - effectively suggesting that interest rates had reached their nadir," said Marilyn Watson at fund manager BlackRock.

It is hard to describe the comprehensive package of easing measures as disappointing. The euro is already significantly undervalued and has been consolidating at lower levels for just over a year now. The ECB's inability to weaken the euro further strengthens the case that the euro may have already bottomed. That said, the initial strengthening of the euro could yet prove to be an overreaction and temporary.

The euro is likely to be undermined in Q2 as well by the heightened risk of negative Brexit spill-overs. Improving macroeconomic fundamentals in the U.S. have increased the likelihood that the Fed will resume rate hikes in Q2 and hence the scope for EUR/USD to grind lower during the rest of the year. EUR/USD was trading at 1.1087 at 1145 GMT, easing from session highs at 1.1209.