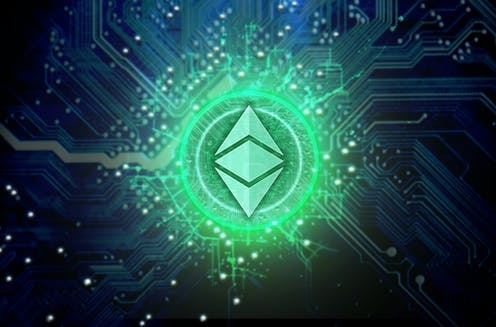 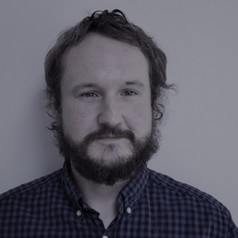 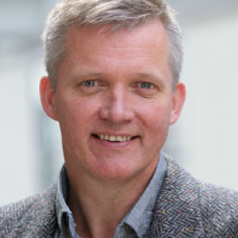 The price of the world’s second largest cryptocurrency, ether, hit a new all-time high of US$1,440 (£1,050) on January 19. This breached a previous high set three years ago and gave ether a total value (market capitalisation) of US$160 billion, although it has since fallen back to around US$140 billion.

Ether, which runs on a technology system known as the ethereum blockchain, is worth over ten times the price it was when it bottomed during the COVID market panic of March 2020. And the cryptocurrency is still only five years old. In part, this remarkable rise in the value is due to excess money flowing into all the leading cryptocurrencies, which are now seen as relatively safe store-of-value assets and a good speculative investment. 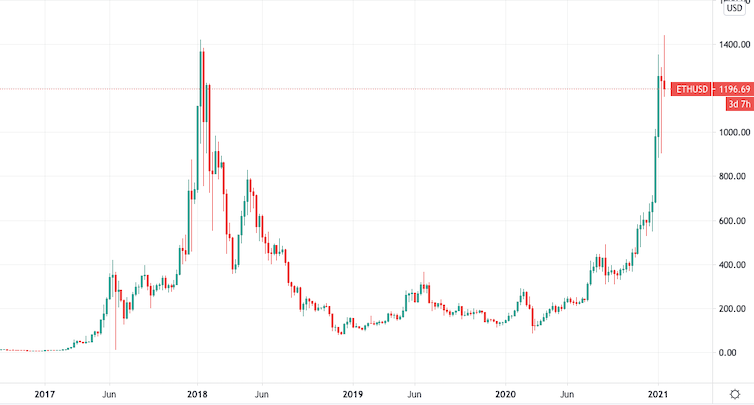 But ether’s price rise has even outstripped that of the number one cryptocurrency, bitcoin, which “only” had a seven-fold increase since March. Ether has outperformed partly due to several improvements and new features being rolled out over the next few months. So what are ether and ethereum and why is this cryptocurrency now worth more than corporate giants such as Starbucks and AstraZeneca?

Blockchains are online ledgers that keep permanent tamper-proof records of information. These records are continually verified by a network of computer nodes similar to servers, which are not centrally controlled by anyone. Ether is just one of over 8,000 cryptocurrencies that use some form of this technology, which was invented by the anonymous “Satoshi Nakamoto” when he released bitcoin over a decade ago.

The ethereum blockchain was first outlined in 2013 by Vitalik Buterin, a 19-year old prodigy who was born in Russia but mostly grew up in Canada. After crowdfunding and development in 2014, the platform was launched in July 2015.

As with the bitcoin blockchain, each ethereum transaction is confirmed when the nodes on the network reach a consensus that it took place – these verifiers are rewarded in ether for their work, in a process known as mining.

But the bitcoin blockchain is confined to enabling digital, decentralised money – meaning money that is not issued from any central institution unlike, say, dollars. Ethereum’s blockchain is categorically different in that it can host both other digital tokens or coins, and decentralised applications.

Decentralised applications or “dapps” are open-source programs developed by communities of coders not attached to any company. Any changes to the software are voted on by the community using a consensus mechanism.

Perhaps the best known applications running on the ethereum blockchain are “smart contracts”, which are programs that automatically execute all or parts of an agreement when certain conditions are met. For instance, a smart contract could automatically reimburse a customer if, say, a flight was delayed more than a prescribed amount of time.

Many of the dapp communities are also operating what is known as decentralised autonomous organisations or DAOs. These are essentially alternatives to companies and seen by many as the building blocks of the next phase of the internet or “web 3.0”. A good example is the burgeoning trading exchange Sushiswap.

Ethereum has evolved and developed since its launch six years ago. In 2016, a set of smart contracts known as “The DAO” raised a record US$150 million in a crowdsale but was quickly exploited by a hacker who siphoned off one- third of the funds. However, since then, the ethereum ecosystem has matured considerably. While hacks and scams remain common, the overall level of professionalism appears to have improved dramatically.

Why the price explosion

Financial interest in ether tends to follow in the wake of bitcoin rallies because it is the second-largest cryptocurrency and, as such, quickly draws the attention of the novice investor. All the same, there are other factors behind its recent rally.

The first is the pace of innovation on the platform. Most activity in the cryptocurrency space happens on ethereum. In 2020, we saw the emergence of decentralised finance (DeFi). DeFi is analogous to the mainstream financial world, but with the middleman banks cut out.

Users can borrow, trade, lend and invest through autonomous smart contracts via protocols like Compound, Aave and Yearn Finance. It sounds like science fiction, but this is no hypothetical market – approximately US$24 billion is locked into various DeFi projects right now. Importantly, DeFi allows users to generate income on their cryptocurrency holdings, especially their ether tokens.

The second factor behind the ether surge is the launch of ethereum 2.0. This upgrade addresses major concerns impacting the current version of ethereum. In particular, it will reduce transaction fees – especially useful in DeFi trading, where each transaction can end up costing the equivalent of tens of US dollars.

Ethereum 2.0 will also eliminate the environmentally wasteful mining currently required to make the ethereum blockchain function (the same is true of many other cryptocurrencies, including bitcoin). Within the year, ethereum should be able to drop the need for vast industrial mining warehouses that consume huge amounts of energy.

Instead, transactions will be validated using a different system known as “proof-of-stake”. The sense that ethereum addresses problems like these quickly rather than letting them sit could prove a major differential from the sometimes sluggish and conservative pace of the bitcoin development culture.

A final factor is the launch of ethereum futures trading on February 8. This means that traders will be able to speculate on what ether will be worth at a given date in the future for the first time – a hallmark of any mature financial asset. Some analysts have said the recent bitcoin rally has been fuelled by traditional investment firms, and the launch of ethereum futures is often touted as opening the doors for the same price action.

However, as every seasoned cryptocurrency user knows, both currencies are extremely volatile and are as liable to crash by extremes as rise by them. Bitcoin’s price fell 85% in the year after the last bull market in 2017, while ether was down by 95% at one stage from its previous high of US$1,428. Its recent rapid retun

Whatever the valuation, the future of ethereum as a platform looks bright. Its challenge is ultimately external: projects such as Cardano and Polkadot, created by individuals who helped launch ethereum itself, are attempting to steal ethereum’s crown.

But as bitcoin has shown, first-mover advantage matters in cryptocurrency, and despite bitcoin’s relative lack of features it is unlikely to be moved from its dominant position for some time. The same is most likely true for the foreseeable future with ethereum.