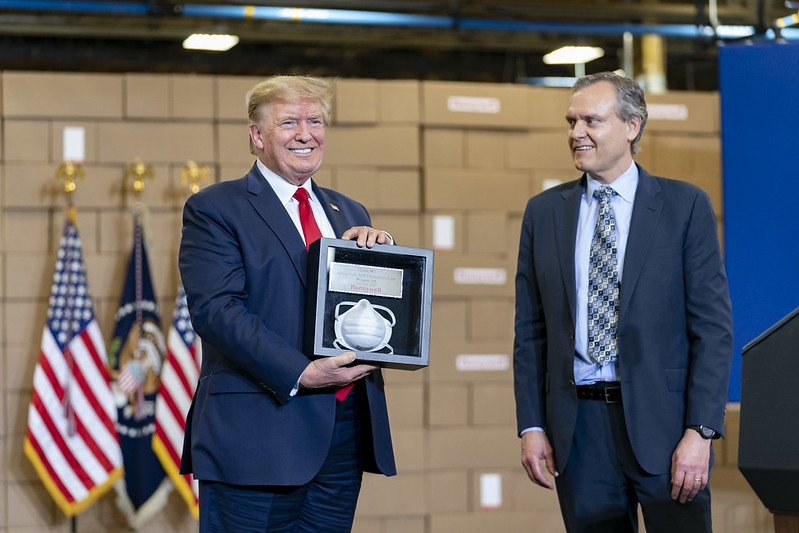 President Donald Trump visited a Honeywell mask manufacturing facility located on Arizona on Tuesday, his first trip outside Washington, DC since the coronavirus pandemic hit the country. But what was surprising during the visit was that the President went against one of the most important Centers for Disease Control and Prevention (CDC) recommendations meant to keep the pathogen’s spread in check.

Photos taken during President Donald Trump’s visit to the Honeywell plant show that he did not wear a mask, according to CNN. This is against CDC’s recommendations that people should wear “cloth face coverings in public settings where other social distancing measures are difficult to maintain (e.g., grocery stores and pharmacies), especially in areas of significant community-based transmission.”

He also maintained that he actually put a mask on for some time but the press did not it. “I had a mask on for a period of time,” the President said on Wednesday, according to Reuters. “.I can’t help it if you didn’t see me.

Trump also explained that he wasn’t wearing a mask in the photos after consulting with Honeywell International Inc.’s chief executive. “I mean, I had a mask on, but I didn’t need it,” he explained. “And I asked specifically the head of Honeywell: ‘Should I wear a mask?’ And he said, ‘Well, you don’t need one,’” Trump said.

The President did not wear a mask as he toured the production facility and held a meeting about how Native Americans are affected by the virus.

Trump took a tour of the facility, held a meeting about how the virus was affecting native Americans, and gave remarks, all without a mask. Some senior officials who joined Trump’s tour also ditched wearing masks.

“Not too long, but I had it on. I had it on ... backstage,” Trump responded when asked how long he had the mask on. “But they said you didn't need it, so, I didn't need it. And by the way, if you noticed, nobody else had it on that was in the group.”

Honeywell also said on Wednesday that it tested those who came into contact with Donald Trump as a precautionary measure. “Following White House recommended protocol, a small number of individuals directly interfacing with the president ... were tested for COVID-19 immediately prior to the event, received negative test results, and were permitted to not wear masks ... All others present were wearing masks ... in accordance with Honeywell’s site policy.”