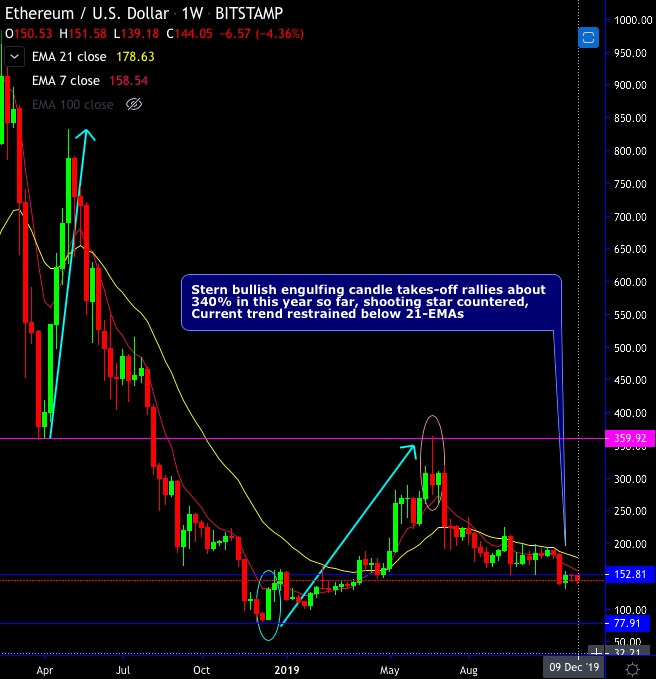 In this write-up, we run you through Ethereum’s price rollercoaster during 2019, we assess the underlying driving forces and growing pains in 2020 that lie ahead as the network switches from 1.0 to 2.0.

As DeFi has been striking the chord among the largest crypto companies, huge money is flowing in decentralized finance (DeFi), many platforms built on Ethereum.

Thus, analysis on Ethereum’s seasonal characteristics and use the Hurst exponent to tease out a likely trajectory in 2020. Subsequently, we verify the fundamental metrics driving price and assess their implications for the future of the Ethereum network.

ETH has been resistance to the downtrend as the Ethereum 2.0 is officially gone live and it has been surpassing the 9,069,000 blocks in its Istanbul hard fork.

ETHUSD (at Coinbase) has been showing resistance after a resounding consolidation phase after bearish rout seen in 2018.

Although the minor trend goes in sloping channel, the rallies spike above DMAs upon stern bullish engulfing candle at $129.61 levels, consequently, the price of ether against dollar has surged more than 340% in 2019 so far. But the minor trend tests sloping channel support, any bounce back above 21-DMAs signal renewed upside traction.

DeFi is not constrained to lending; the Lightning Network  is the uniqueness of decentralized finance applications as it enables users to transact with a swift pace on a distributed ecosystem. The niche areas such as decentralized exchanges (DEXes) and derivatives based on DeFi platform is most likely to boom significantly.

Commodities and Futures Trading Commission (CFTC) chairman ​Heath Tarbert suggested in October 2019 that the US regulatory body has to consider ETH as a commodity. Tarbet said that he expected regulated ETH futures in as soon as six months.

Speaking a month later at Consensus Invest: NYC​, Tarbert explained that the CFTC, and its sister body, the Securities and Exchange Commission (SEC), were now carefully studying the implications of the upcoming Ethereum 2.0 chain switch on ETH’s asset classification.

The switch to Ethereum 2.0 will mean a switch from PoW to PoS and there are concerns that the switch of consensus algorithm will affect the ‘sufficiently decentralized’ distinction needed for an asset to avoid a stricter security classification under US law. A switch to PoS from PoW means shifting away from confirming transactions based on a processing power competition - and instead gives nodes the opportunity to ease their computational requirements by staking their tokens to the network.

Fundamentally, we see some constructive commentaries to drive bullish ETH, while CME announced Bitcoin Options, we get to see Ethereum Futures in 2020.