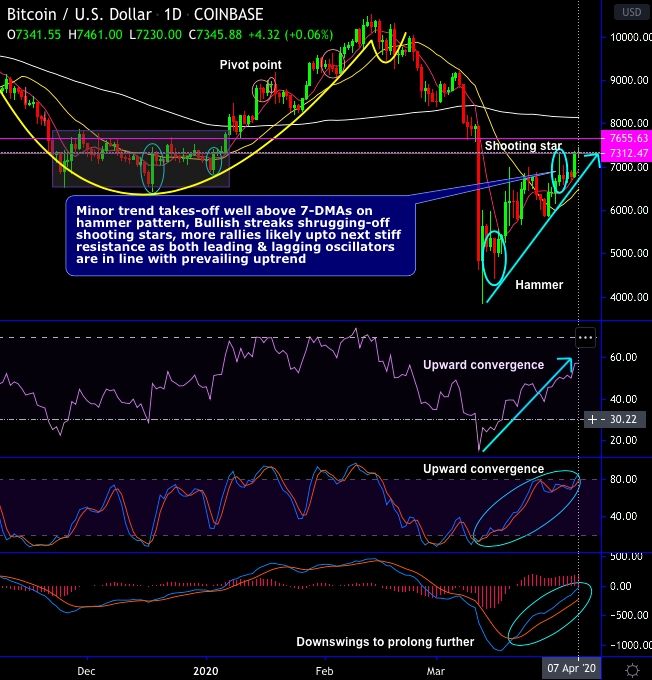 Bitcoin (BTCUSD at Coinbase) price has been stabilized and regained the buying sentiments amid the struggle of the financial markets due to pandemic outbreak. The price of bitcoin has now reclaimed $7,000 levels and stabilizing well these above (currently, trading at $7,419 level).

As the outbreak keeps widening, the minor trend of BTC takes-off well above 7-DMAs upon hammer pattern occurrence at $5,037.61 levels.

Such bullish price sentiment is observed as the Bitcoin (BTCUSD) halving is expected to be scheduled around 18th May 2020. While sceptics and pessimists continue to the carry dubious eyes on Bitcoin’s sluggishness in adoptability and its price prospects. On the flip side, quite a few factors are functioning that are conducive for Bitcoin rather than destructively.

With Bitcoin Cash, their miners would also be earning less BCH per block from this week, and this may turn miners away from the network in the near term. The price of BCH has also surged considerably (i.e. 12%) in anticipation of its halving.

The pricewise, ‘Put/Call Ratio’ of above 1 indicates there are more number of put buyers than calls and this has been perceived as a bearish indicator. The Put/Call ratio for Bitcoin Options is smack in the middle of that range suggesting that traders are poised for a price reversal. The put/call ratio has been a conducive tool and effective measures of underlying market sentiment for the forecasting future market trend. The put-call ratio emphasizes the difference in trading volume between puts and calls.

The macroeconomy may either undergo an extreme recessionary phase or an outright depression. While the Bitcoin that is incepted during the last financial crunch (2008) and designed for combating such crisis, its price likely to surge exponentially amid mild obstacles. As the many countries are locked-down, due to which businesses have halted and in several cases stay-at-home restrictions to maintain the social distancing is paving the way for people to look into the astonishing world of cryptos.