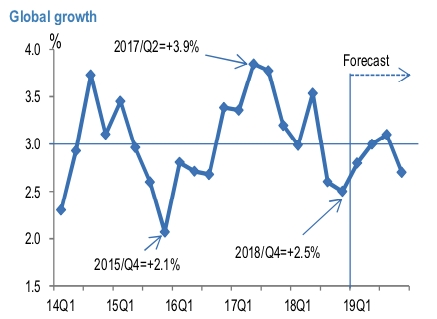 Bullion market dynamics are still turbulent: Gold broke above $1,400/mt on a perfect mix of ingredients but still remain in the turbulent range – low bond yields, a soft dollar, geopolitical and trade tensions, and slowing global growth. Despite the slight sell-off in equities, safe havens sold-off as well, with gold, the yen and safe government bonds weaker.

From the recent past, as cross border trade tensions across the globe, and especially between the United States and China mounting up, stimulating apprehensions to the current sensitive and weaker global economic fabric, amid such a backdrop both Bitcoin and gold look little attractive as a safe-haven options as their prices have begun to take off and rally in the recent past.

However, despite equity markets moving to fresh year-to-date highs, our global equity strategists remain constructive, seeing the current market backdrop as very similar to the 2015/16 mid-cycle correction episode, rather than the end of the cycle. This could, in theory, begin to increasingly erode any built-up “safe haven” gold demand. To this end, despite a reduction of more than 38,000 contracts last week, net non-commercial positioning on Comex still stands just below 100,000 contracts long.

In conjunction with gold and Bitcoin safe-haven sentiment, one could actually expect other traditional safe-haven asset classes such as JPY or CHF – duos seem to be struggling for their stability quite often in the recent past. As a result, investor class in the dynamic finance arena is ultimately cognizant about Bitcoin and other crypto peers in the same light as a potential safe haven role during the economic crisis, contemplating the very essence/need for the invention of cryptocurrency during 2008.

It is quite universally known fact that investors are desperate and inclined for high-risk assets such as stocks during the phase of industry growth. On the contrary, the global economy begins to slump or access through a recessionary zone, under such a scenario, investors likely to head backward to safe haven asset classes such as gold, real estate, FX pairs such as CHF or JPY all highly regarded for their general stability.

Noticeably, Bitcoin’s unique attribute to be deemed as a safe haven instrument is that it is made as a global currency.

Bitcoin’s price volatility that seems little scary causing steep slump and sharp rallies that arrives and disappears quite often, because of which risk-averse category of investors perceive such asset as too risky to ever be considered something that is “safe” during economic distress.

Although the economic growth is expected to slow down towards the end of this year, many economists continue to expect that the US and the global economic growth will remain above potential growth rates and the global growth bottomed in 4Q last year (refer above chart). Elsewhere, the prospect for sustained private capital outflows from CHF suffered a setback due to the protracted cyclical slowdown in the Euro area and the fading prospect for the ECB to begin to normalize policy over any reasonable timeframe.

Whatsoever be the case, the fundamental design of Bitcoin’s deflationary property driven by the underlying robust technology ‘blockchain’ which is coupled with luring gains during the phase of its boom cycles and during mounting global economic threats make it more attractive as a safe haven. Courtesy: JPM

Currency Strength Index: FxWirePro's hourly BTC spot index is flashing at 98 (which is highly bullish), while hourly USD spot index was at -25 (mildly bearish) while articulating at 06:16 GMT.