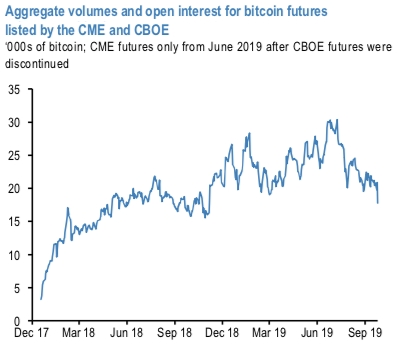 We have noted the gradual maturing of the cryptocurrency gamut as the influence of institutional investors has grown in the aftermath of the listing of bitcoin futures since December 2017.

Indeed, a few months ago we noted that the true level of institutional participation was likely greater than widely used trading volume figures implied, as a number of sources suggested that only around 5% of reported trading volume aggregated across cryptocurrency exchanges was genuine.

Recently, we saw the launch of newly introduced bitcoin futures on the Intercontinental Exchange with physical delivery in the Bakkt Warehouse but volumes were tepid. The listing of futures with physical delivery on a regulated exchange should actually serve to enhance the bitcoin market structure by allowing investors, particularly miners, to better hedge existing bitcoin exposures.

This is because existing cash-settled futures may only allow for imperfect hedging as hedgers are susceptible to price risk associated with converting bitcoin to cash at maturity. And there is an issue of potential manipulation with cash-settled contracts as settlement is based on a collection of spot prices from a number of exchanges with variable liquidity, which traders may be able to manipulate around the time of the futures contracts expiry.

An average of 212 contracts for monthly Bitcoin futures were traded on Bakkt which is a new all-time high, as compared to the 25 contracts that changed hands the previous day.

Well, following the launch of the new physically delivered contracts, initial volumes after trading started this week have been rather low with less than 100 bitcoin traded on the first day. However, we note that these low initial volumes carry resembles of the initial listing of cash-settled bitcoin futures by the CME and CBOE back in December 2017. Initial volumes were low for CME as well (refer above chart), but the open interest kept growing steadily. The listing of the CME futures coincided with all-time highs in bitcoin prices, and researchers at the San Francisco Fed suggested that by providing a market where bearish positions could be more readily expressed the listing of these futures contributed to the reversal of bitcoin price dynamics. In a similar vein, it may be that the listing of physically settled futures contracts (that enables some holders of physical bitcoin e.g. miners to hedge exposures) that has contributed to recent price declines, rather than the low initial volumes. Courtesy: JPM