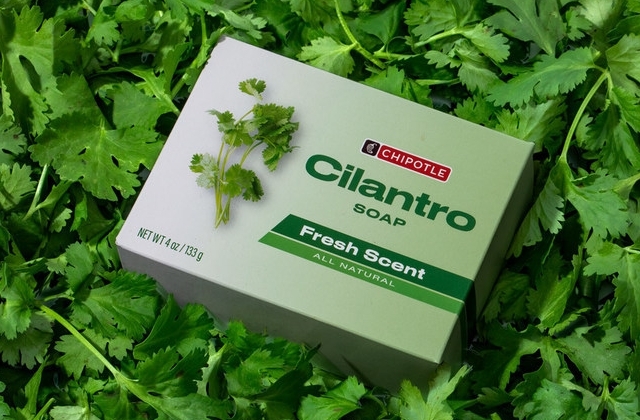 Chipotle Mexican Grill is not just about food, and this was made evident when it announced another new item to its Chipotle Goods line. The latest addition was revealed to have been made after being inspired by a popular meme.

Chipotle launched its Cilantro Soap, and it is already available on Chipotle Goods online shop. The company stated that the new product will be on sale until supplies last. This is surely something new because the soap was made from real herbs.

As per Fox Business, Chipotle's Cilantro Soap was created based on a joke and inspired by a meme. Last year, the company uploaded a photo of a fake cilantro soapbox on social media, and there were many reactions to the post. With the responses, Chipotle decided to make a real soap made with cilantro.

There were also comments that said cilantro actually tastes like soap, and this was noted by the Mexican restaurant chain. Apparently, the conversations made Chipotle consider the idea, and now the company made it happen and the Cilantro Soap is on sale.

Along with the release of the new soap, a new promo was also launched for Chipotle Rewards members. From Dec. 2 to Dec. 8, members can collect an exclusive Cilantro Lover badge by buying at least one food item with cilantro. The badge will allow members to unlock access to extra points to get free treats at Chipotle restaurant outlets.

"Our Cilantro Soap plays into a larger trend of turning digital moments into real-life experiences," Chipotle's chief marketing officer, Chris Brandt, said in a press release. "Every Chipotle fan, regardless of which side of the great cilantro debate they're on, can appreciate this fan-inspired gift."

Meanwhile, fans can also purchase other new goods from Chipotle Goods for this holiday season. Aside from the cilantro soap, the company dropped several other items, and these are all-season beanies, avocado dye - iron crumple, avocado dye - iron solid, and dad hats.

"Made with real ingredients, this 100% real soap bar is the perfect gift for cilantro lovers and haters alike," Chipotle stated to describe its new soap offering. "Just make sure they don't eat it."