The Chinese embassy has lashed out at two Liberal members of parliament, Andrew Hastie and James Paterson, saying they would need to “repent and redress their mistakes” before they would be welcome in China.

The attack came after the pair, strong critics of the Beijing regime, were refused visas to take part in a trip sponsored by the think tank China Matters.

In a statement late Friday regretting they had been refused entry, Hastie and Paterson said they were “particularly disappointed that the apparent reason why we are not welcome in China at this time is our frankness about the Chinese Communist Party”.

They added they would “always speak out in defence of Australia’s values, sovereignty and national interest.”

The embassy hit back, saying:

The Chinese people do not welcome those who make unwarranted attacks, wantonly exert pressure on China, challenge China’s sovereignty, disrespect China’s dignity and undermine mutual trust between China and Australia.

As long as the people concerned genuinely repent and redress their mistakes, view China with objectivity and reason, respect China’s system and mode of development chosen by the Chinese people, the door of dialogue and exchanges will always remain open.

Both Hastie and Peterson said on Sunday they would not be repenting.

China Matters has postponed the study tour, which was due to take place next month.

It said the goal of the tours it sponsored was “to facilitate free-flowing, off-the-record and informal discussions” with citizens in China.

In previous tours “no issues have been left unaddressed, including our concerns about the plight of Uighurs in Xinjiang and the ongoing protest movement in Hong Kong”. It was “unfortunate” the politicians’ names had become public before the visit, China Matters said in its statement.

China Matters describes itself as “an independent Australian policy institute established to advance sound policy and to stimulate a realistic and nuanced discussion of the PRC among Australian business, government and the security establishment.”

The government is trying to keep out of the controversy, saying it was a privately sponsored trip.

Labor frontbencher Stephen Jones told Sky:“I think because of the mismanagement of this government, we’ve got relations with China probably an all-time low”. 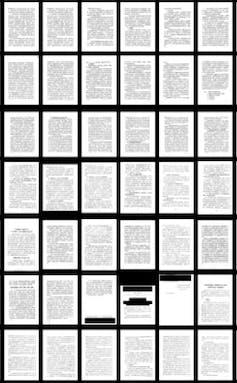 Some of the 400 pages of documents detailing the treatment of China’s Uighur minority leaked to the New York Times. NYT

The New York Times reported that the more than 400 pages, leaked from within the Communist Party, “provide an unprecedented inside view of the continuing clampdown in Xinjiang, in which the authorities have corralled as many as a million ethnic Uighurs, Kazakhs and others into internment camps and prisons over the past three years”.

Payne said: “I have previously raised Australia’s strong concerns about reports of mass detentions of Uighurs in Xinjiang.

"We have consistently called for China to cease the arbitrary detention of Uighurs and other groups. We have raised these concerns - and we will continue to raise them both bilaterally and in relevant international meetings.”