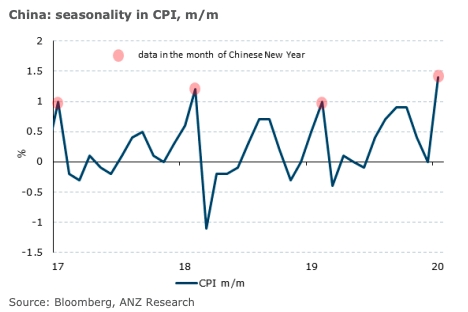 China’s consumer price inflation (CPI) for the month of January has overshot market expectations in January, partially due to the virus outbreak, because a 1.4 percent m/m spike is higher than the seasonal increases seen over the past three years.

According to the statistical practice, the prices of fresh farm products like vegetables, meat, and fruits are compiled every five days in the month. So the acceleration in food prices (4.4 percent m/m) reflects the impact of the novel coronavirus, ANZ Research reported.

Meanwhile, the prices of other goods and services are compiled less frequently and so are less affected by the outbreak. Although the headline PPI figure returned to positive territory in January, the continued uncertainty from the virus outbreak and subsequent deflationary risks facing Chinese factories will be concerning.

Geopolitical tensions in the Middle East had fuelled a jump in oil prices in early January, contributing to the increase in headline PPI (+4.3 percent m/m or 17.5 percent y/y). However, the virus outbreak has dampened commodity prices, with Brent crude dropping more than 20 percent over the past two weeks.

"We expect China’s PPI to turn negative in February, exerting downward pressure on industrial activities in H1 2020," the report added.

The probability of another cut in the 7-day reverse repo is low, as the People’s Bank of China (PBoC) will place emphasis on financial stability and efforts to contain the virus via liquidity injections and re-lending.

Meanwhile, the rate cut made on February 3 is an act of front-loading, more to restore market confidence rather than counter-cyclical adjustment. It would be interesting to see if the PBoC will cut the reserve requirement ratio (RRR) to support the banking sector, ANZ Research further noted in the report.