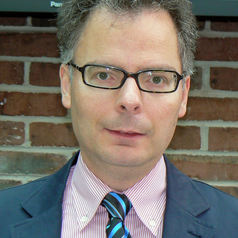 Three years on from its vote on EU membership and the UK still has little idea what its future relationship with the EU might turn out to be. Under pressure from europhile members of her cabinet, Theresa May has finally decided that running the Brexit clock down is in nobody’s interest. Instead, she has now taken the perhaps equally disappointing decision to kick the Brexit can further down the road, if politically necessary.

Just how far down the road is itself not clear. If May’s withdrawal agreement does not pass on March 12, she has promised a vote on March 13 on whether MPs support a no-deal Brexit. And if that fails, there will be another vote on March 14 on requesting an extension to the Article 50 negotiation process – thereby delaying Brexit. It remains unclear how long this would be for, although EU sources have suggested 21 months as a plausible length for defining the future relationship between the EU and UK. 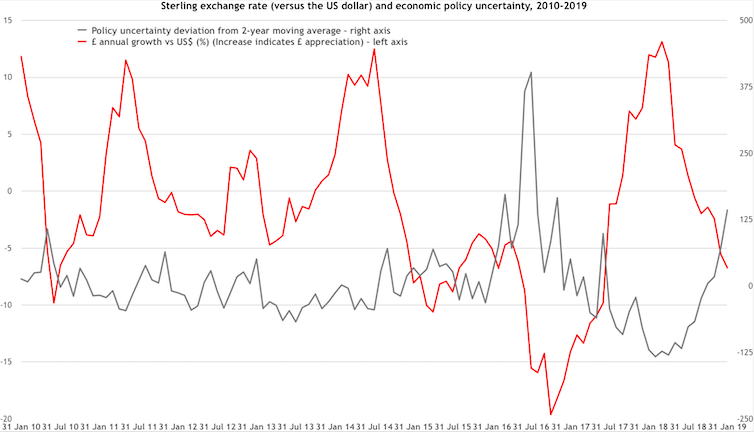 The graph shows how uncertainty sky rocketed in the aftermath of the EU referendum of June 2016. As policymakers adjusted to the reality of the referendum result, policy uncertainty declined and more so following from March 2017 when Mrs May triggered Article 50 in an attempt to enter “meaningful” negotiations with the EU.

Nevertheless, the never-ending negotiations have definitely taken their toll, as evidenced from the visible spike in policy uncertainty in 2018 and early 2019. Rising policy uncertainty causes the pound to depreciate versus the US dollar. This, in turn, translates into inflation and adds pressure on the Bank of England to either raise interest rates (to combat inflation) or become less unwilling to stimulate the economy by cutting interest rates if a damaging no-deal Brexit becomes reality.

Large swings in the exchange rate, combined with higher policy uncertainty, means that UK exporters face constant uncertainty over their earnings and future investments. This makes them less willing to invest. Not only does this deprive the economy of new jobs, it also undermines the UK’s productivity prospects, adding to the country’s well-known “productivity puzzle” (very weak productivity growth in the aftermath of the 2008-09 financial crisis which leaves little room for strong wage increases). 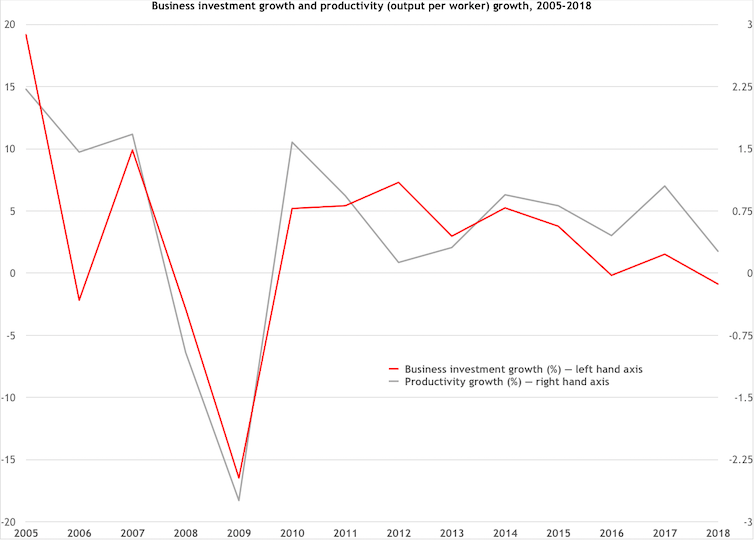 In other words, the ongoing policy uncertainty affects both ends of the economy: consumers who face lower incomes and export producers who prefer not to make productive investments because looming risk poses a threat to their profits.

To counteract the adverse impact of increasing policy uncertainty on business investments and productivity, one option the UK government has is to aggressively cut the corporate tax rate. This currently stands at 19% for the UK (and will be cut further to 17% in 2020). This is already much lower than the OECD average of 23.8%. Since the UK’s corporate tax rate is already a lot lower than its competitors, without having much positive impact, I am afraid that May’s government is running out of options to counteract the adverse impact of uncertainty. That is, apart from dealing with the uncertainty itself.

But British politicians seem to be consumed with their own infighting rather than dealing with the real issue of negotiating a future working relationship with the EU. There is little to suggest that, if the Article 50 process is extended, the uncertainty fog surrounding Westminster will lift. So merely extending Article 50 will do little to reassure businesses and consumers that there is light at the end of the Brexit tunnel.

French statesman Charles de Gaulle famously said: “To govern is always to choose among disadvantages.” Delaying every decision instead fuels uncertainty and damages both your credibility and the economy.