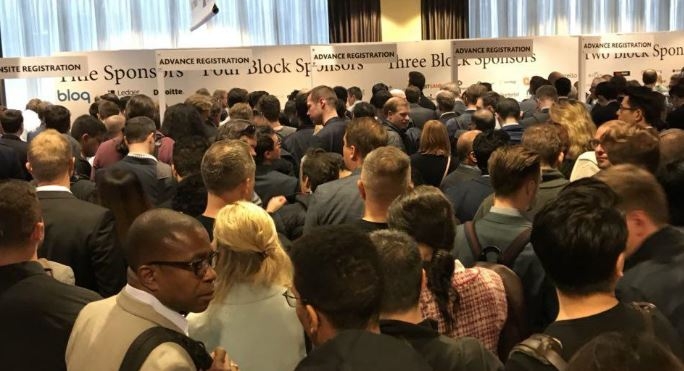 New York City has recently seen the clash of worlds between cryptocurrency enthusiasts and blockchain investors. The Big Apple was the grounds where the Blockchain Week took place from May 11-17, showing how blockchain and cryptocurrency have grown in just a few years.

The show featured a lot of the flashy and alluring side of cryptocurrency, specifically those involved in Bitcoin. Bitcoin Lamborghinis have been spotted around Midtown venue and there were even cryptocurrency-studded coins and jewelry for sale during the Consensus event.

On the other side of the conference told a completely different story. Blockchain used for Logistics was being discussed by FedEx, while Microsoft and other tech giants were exchanging dialogue regarding enterprise adoption.

There were also numerous cryptocurrency enthusiasts walking around in simple jeans and shirts and there were people in sharp suits that have their attention trained on the blockchain market. Overall, the Consensus, hosted by Coindesk, has attracted around 8,500 attendees cramming inside the relatively cramped venue.

Last year, the show only saw a third of this number. Tickets for the event was $2,000, while last-minute attendees had to fork over $3,000 or .03 Bitcoin for people who doesn’t think traditional currency anymore. Doing the math, the event pocketed $17 million in ticket sales alone.

With all these different people packed in a single place, there is bound to be a collision of ideas. And during a Monday afternoon panel, it finally happened. The talk was supposed to cover “secure and reliable commercial network” but has diverted into a heated argument between two opposing heavyweights. The calm and collected CEO of Ethereum company ConsenSys Joseph Lubin was on one side, while Jimmy Song was on the other, a Bitcoin developer and Blockchain Capital’s partner who was the opposite of Lubin.

Wearing his cowboy hat, Song huffed and called blockchain “magic dust,” which doesn’t solve problems outright. He added that the future of blockchain technology lies heavily on Bitcoin. During the course of this exchanges, Lubin managed to convinced Song to a wager saying that Song is completely off the mark where Bitcoin and blockchain are heading five years from now. The dialogue between the two was met with cheers from half the crowd, while the other half just sat there with a calculating expression.

At the end of it, the main question still hanged on the air like the scent of a passing cigarette smoke. Which one holds more significance, Bitcoin’s explosive entry in the economy market or blockchain’s technology that’s attracting investments from large banks and corporations?