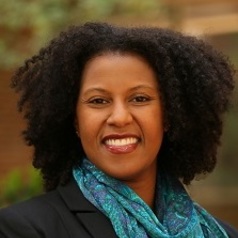 Blacks are at higher risk for several health conditions in the U.S. This is true for heart disease, hypertension, type 2 diabetes and stroke, which are often chronic diseases. And it is also for Alzheimer’s disease, in which blacks have two times higher incidence rates than whites.

So, why do these disparities exist, especially in Alzheimer’s disease, which isn’t typically considered a chronic disease but a progressive one, or one that worsens over time?

Some researchers attribute the gap to both societal and systemic factors related to inequities in education, socioeconomics, income and health care access. Other factors such as stress, diet, lifestyle and genetics may also contribute. However, there’s a less-explored question in Alzheimer’s that could contribute to this disparity: Is the underlying biology of the disease somehow different in blacks and non-Hispanic whites?

I am a basic science researcher who studies racial disparities in Alzheimer’s disease. I have begun to uncover that the biology underlying the disease may not be the same in African Americans and non-Hispanic whites.

My laboratory is working on several projects to better understand the biology of Alzheimer’s disease in African Americans and how it may be the same or different in non-Hispanic whites. We will share our preliminary findings soon, as this work is necessary to help understand the root cause of this disparity. Even more important, this will help us to understand the disease for everyone.

I believe that many factors together contribute to health disparities in Alzheimer’s disease, and biology is one very worth exploring. Even when considering clinical trials for Alzheimer’s disease, blacks represent fewer than 5% of participants, whereas they represent about 13% of the U.S. population. That makes it hard to know if and how these potential therapies may work for blacks and other underrepresented groups. This makes it important to understand the biology of the disparities because it could impact the development and effectiveness of potential therapies. 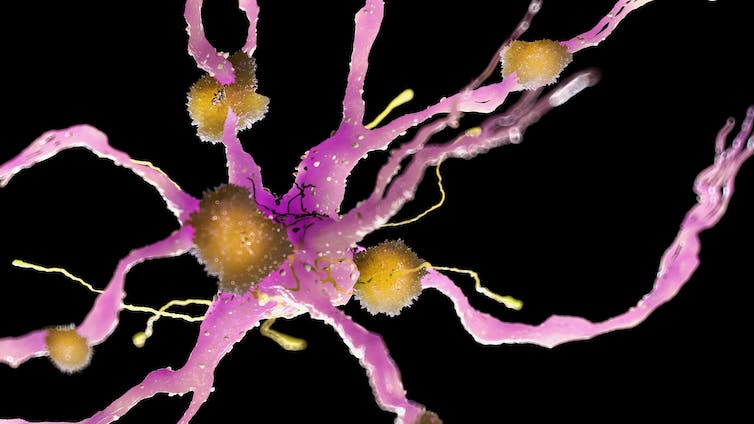 Illustration of amyloid plaques on a nerverticale cell, which are found in the brain. Getty Images / Sciepro / Science Photo Library

The ABCA7 gene is involved in lipid transport, meaning that is important for moving lipids, or fatty acids, in the blood and the brain. However, we researchers do not yet exactly understand how this gene or others increases risk in African Americans.

We are beginning to answer this question with a $4.2 million award recently received from the National Institutes of Health. We will study proteins from the blood of Africans Americans with hypertension or with Alzheimer’s disease. By comparing our findings in these subpopulations, we will be able to determine if there are any similarities in the biology of both diseases. For a smaller number of participants, we will be able to study proteins in autopsied brains. We expect some initial results in the early part of 2021.

For example, in our own work and that of others, we are led to believe that differences in inflammation and lipid metabolism may be responsible for some of the disparities that exist in Alzheimer’s disease.

Could proteins in the brain be different?

In one preliminary study, we have compared several thousands of proteins – an analysis called proteomics – in three different autopsied brain regions from African Americans and non-Hispanic whites. We found many proteins that are related to having Alzheimer’s disease that are the same in both African Americans and non-Hispanic whites, but we were surprised to find that there were changes related to having Alzheimer’s disease that were unique to the African Americans. We have ongoing studies to replicate these findings.

This kind of result, though, raises a few major points. First, researchers can learn more about the biology of Alzheimer’s disease by ensuring that diverse and especially disparate groups of subjects are included in their studies. Second, the disease may behave somewhat differently underneath the surface in different populations. This is critical to know in order to develop diagnostics or therapies that can be tailored accordingly. Finally, more of these kinds of studies are necessary in order to get us closer to finding a cure for the disease.

Big “omics” studies, which can measure thousands of genes, proteins, lipids and metabolites, when applied to racial disparities in Alzheimer’s disease, will give a wealth of information to help explain why these disparities exist. Other researchers are beginning to apply these kinds of techniques. Recently, researchers have confirmed the importance of inflammation in Alzheimer’s disease and note that specific inflammatory genes only show up in African Americans or non-Hispanic whites. Additionally, in the utility of amyloid and tau biomarkers for Alzheimer’s, recent work supports that race is an important factor in establishing these biomarkers.

How you can participate in a clinical trial. Courtesy National Institute On Aging/YouTube.

The truth of the matter is when we used the PubMed database to search for omics studies of African Americans in Alzheimer’s disease, we found that African Americans were grossly underrepresented. Many of the studies excluded African Americans. Thus, even beginning to explain why disparities exist – much less reducing and eliminating them – is challenging, because basic science research studies are not including African Americans enough.

Inclusion of diverse groups in basic science research and clinical trials of Alzheimer’s disease is a critical first step to helping reduce and eliminate health disparities. It will further our understanding of the disease. It will more rapidly facilitate the search for diagnostic markers or therapies that will yield strategies effective for helping everyone.

With another recent clinical trial of two promising Alzheimer’s disease drugs failing, we need a complete picture of the disease. The medical community can best achieve this by ensuring that blacks, Hispanics and other disparate groups are included in all studies, especially those that are basic science research studies.