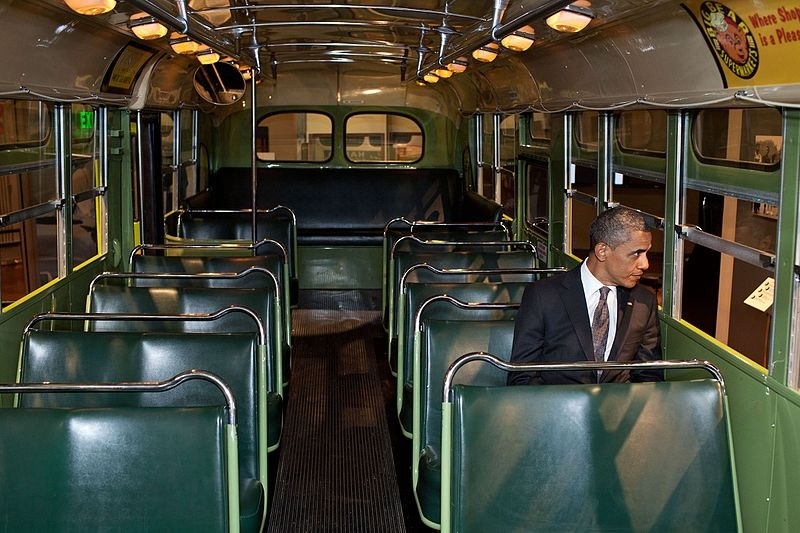 Former US President Barack Obama sits in the same row of the bus where Rosa Parks did that led to her arrest during the segregation era. | Credit: Official White House Photo by Pete Souza / Wikimedia Commons (Public Domain)

Former President of the United States Barack Obama reached out to the family of George Floyd in early June through a phone call. A recent report has described their conversation as being emotional and had lasted for around 25 minutes.

Many Americans naturally turned to the messages that Obama, the first Black president of America, to find comfort following the deaths of Floyd, Ahmaud Arbery, Breonna Taylor, and other fatal cases involving police officers and Black victims. Obama was also one of the political figures who have reached out to the Floyd family as they grieve the death of George.

New York Times reported Obama called the Floyd family on June 4 on the same day a public memorial for George was held in Minneapolis. Civil rights activist Rev. Al Sharpton, who witnessed the phone conversation, said Obama told the grieving family, “I want you to have hope. I want you to know you are not alone. I want you to know that Michelle and I will do anything you want me to do.”

Sharpton shared that Obama’s call gave the family solace “for the first time” since George’s death on May 25. George Floyd was killed while being arrested by four Minneapolis police officers including Derek Chauvin, who kneeled on his neck while George Floyd was already handcuffed and in a prone position for almost eight minutes. A video of the incident went viral on social media and sparked nationwide outrage and anti-racism protests that spread across the U.S. and other countries.

Obama and George Floyd’s brother, Terrence Floyd, have both called on Americans protesting racially charged deaths and police brutality to also participate in election polls. In November, the Americans will vote for the presidency where Donald Trump could be reelected or be replaced by presumptive Democratic nominee Joe Biden.

George Floyd’s brother on Donald Trump’s call: ‘He didn't give me the opportunity to even speak’

In late May, Terrence Floyd confirmed that Trump also got on the phone to talk to them following his brother’s death. It was, however, a very different interaction compared to how Obama’s call is being described in the report. “It was so fast. He didn't give me the opportunity to even speak,” Floyd said of Trump’s call. “I was trying to talk to him but he just kept like pushing me off like 'I don’t want to hear what you’re talking about.'”