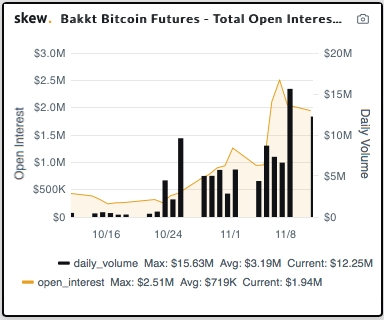 ICE’s Bakkt is striking the chord in the cryptocurrency industry time and again.

We already reported that they are geared-up with the all-time high volumes in the recent past.

It has been a gala time for Bakkt as they are again in the limelight for now with their cryptocurrency trading momentum and with the official announcement of unveiling custodian services to the institutional clients.

In the initial phase, choosing the Bakkt Warehouse as their preferred digital asset custodian are ‘Pantera Capital’, ‘Galaxy Digital’, and ‘Tagomi’. Bakkt would gradually be onboarding additional marquee firms to their custody offering in the weeks to come.

Bakkt has officially made an announcement about the launch of its institutional custody business. Wherein, the company revealed that the Bakkt Warehouse, which until now stored the bitcoin tied to its futures product, would open its doors to clients intending to "safeguard their assets using Bakkt's enterprise-grade offering."

Bakkt's objective of custody services has universally been known long while ago, however, the approval from the New York Department of Financial Services (NYDFS) has stimulated the motives and enables the firm’s intention to officially launch the business.

Consequently, Bakkt has made a buzz in its business with mounting volume of the futures market in a single trading day, Bakkt’s Bitcoin futures saw 1,018 Bitcoin worth of volume, valued at nearly $9 million. You could make out from the above chart that it is picking up the momentum gradually since 3rd week of October. The open interest and volumes curve and histograms have indicated sky-rocketed pace.

Well, we stated earlier also but we don’t mind reiterating the fact that following the launch of the new physically delivered contracts, initial volumes were tepid rather low with less than 100 bitcoin traded on the first day. However, we noted that these low initial volumes carry resembles of the initial listing of cash-settled bitcoin futures by the CME and CBOE back in December 2017. Initial volumes were low for CME as well, but the open interest kept growing steadily.

Overall, gaining momentum in Bakkt’s BTC futures business, the launching plans of cryptocurrency consumer app, merchant portal in the first half of 2020 with Starbucks, and bitcoin options by December are real booster for the bitcoin and stimulants for bitcoin enthusiasts.