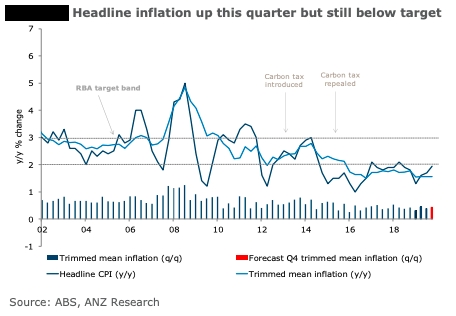 Australia’s headline inflation is expected to come in at 0.7 percent q/q in Q4, with the annual rate rising to 1.9 percent, according to the latest report from ANZ Research.

The largest contributor to the headline figure is from the alcohol and tobacco segment. Petrol prices are also expected to add considerably to inflation this quarter, in contrast to the last. These two components add almost 0.6ppt to the headline number.

Trimmed mean inflation, the underlying measure of inflation focused on by the RBA, is expected to come in at 0.4 percent q/q again this quarter. This would see the annual rate stay at 1.6 percent. The risks to trimmed mean for the quarter are seen as balanced.

The forecast for trimmed mean inflation is in line with what the RBA published in the November SoMP. Although inflation is certainly important to the RBA, at this stage what happens with the labour market data on January 23 will remain key to whether the RBA cuts in February, the report added.

"We think trimmed mean inflation would have to seriously surprise on the upside for the RBA to decide not to cut again in February even if the labour market data was weak. Equally it would likely take a very soft core inflation print to offset a strong employment report," ANZ Research further commented in the report.

Meanwhile, the December quarter CPI will reflect the ABS’s recent reweighting to the expenditure components. Tobacco and fuel, the two components which is expected to have large price rises, have also seen their weights increase significantly in the CPI basket.