Euro area’s core inflation slows down in June, likely to decline further in months ahead 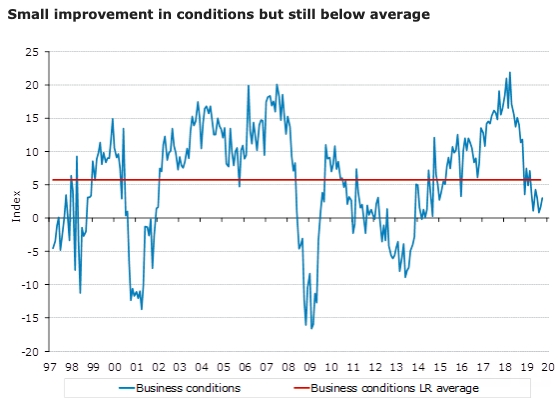 Australia’s business conditions and confidence recovered a little ground in October. While there is still a long way to go before a recovery can be considered in the private sector, there were some tentatively positive signs, ANZ Research reported.

Business conditions recorded another small improvement in October, hitting a three-month high of +3.0, but it is too early to tell if this will be sustained. Confidence also rose slightly to +1.7. Forward orders (up 5.1pts), profitability (up 1.6pts) and trading (up 2.4pts) all rose.

Capacity utilisation recorded a slight decline to 81.7 percent, while the employment index and labour cost growth were largely flat.

Profitability and trading saw a second month of moderate improvements. On the other hand, capacity utilisation and employment were largely flat. Overall, the business sector has not been much responsive to monetary and fiscal stimulus, the report added.

Most states recorded improved business conditions during the month; Queensland was the only state to deteriorate. Most states are running well below their long-run averages, with Queensland, Victoria, and Tasmania in the weakest positions (smoothed using three-month averages). New South Wales has improved over the past few months to just below its long-run average.

Mining, construction, finance, and recreation services all contributed to the monthly gain in business conditions. Manufacturing and transport were the largest detractors. Retail business conditions have been stable for the past few months but remain deep in negative territory.

Mining business conditions are marginally above their long-run averages but all other industries are in negative territory (smoothed using three-month averages).