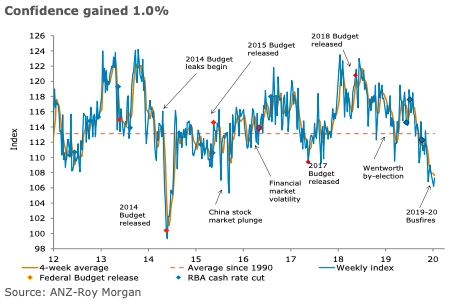 Australia’s ANZ-Roy Morgan consumer confidence gained 1 percent last week, recovering a bit more than half the loss seen in the prior survey. The bounce was primarily due to strength in the economic conditions sub-indices, which is not surprising, given that these were the aspects of the survey that fell sharply in last week’s report.

Current finances declined by 5.5 percent, dropping to its lowest level since June, while future finances gained 0.6 percent for the third consecutive increase. The four-week moving average of ‘inflation expectations’ was down by 0.1ppt to 3.9 percent.

"The weekend’s consumer confidence survey is of considerable interest given the plunge in sentiment in economic conditions recorded over the first weekend of January. With milder weather seeing the intensity of fires diminish, though not by enough to prevent further tragic loss of life, and some better economic news in the form of building approvals, job vacancies and retail sales, it is not surprising that much of the weakness in economic conditions reversed. This was enough to push overall sentiment 1 percent higher. This offers some hope for some recovery in consumer spending after what appears to be a very subdued Christmas retail season," says David Plank, ANZ’s Head of Australian Economics.