Asian markets continue to trade down, gold hovers around $1,550 mark 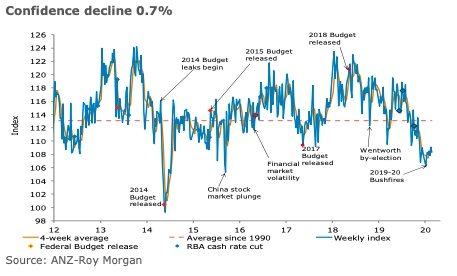 ‘Current finances’ fell 4 percent compared to the prior week, while ‘future finances’ declined 5.2 percent - its second straight weekly loss. In contrast to the weakness in financial conditions, confidence in economic conditions rose.

‘Time to buy a major household item’ gained 1.7 percent, after declining for two successive weeks. The four-week moving average for ‘inflation expectations’ was stable at 4 percent.

"A sharp rise in unemployment and underemployment may explain the fall in ANZ Roy-Morgan Australian Consumer Confidence index last week. Overall confidence is up from its recent low, though still well below average. The decline in confidence was due to weakness in the financial conditions subcomponent. It is possible that news about rising labour market has slack has people concerned about their personal finances. Sentiment toward ‘current finances’ is down 7.5% from its early January high, though still a touch above average. In contrast to the weakness in financial conditions, sentiment toward economic conditions was higher. It is still well below that on financial conditions, however, though the gap between the two has narrowed," said David Plank, ANZ’s Head of Australian Economics.