To save honey bees we need to design them new hives 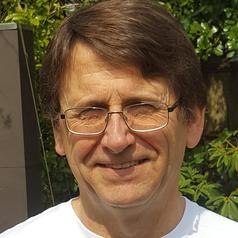 Honey bees are under extreme pressure. The number of honey bee colonies in the US has been declining at an average rate of almost 40% since 2010. The biggest contributor to this decline is viruses spread by a parasite, Varroa Destructor. But this isn’t a natural situation. The parasite is spread by beekeeping practices, including keeping the bees in conditions that are very different from their natural abode of tree hollows.

A few years ago, I demonstrated that the heat losses in man-made honey bee hives are many times greater than those in natural nests. Now, using engineering techniques more commonly found probing industrial problems, I’ve shown that the current design of man-made hives also creates lower humidity levels that favour the Varroa parasite.

Natural nests inside tree cavities create high humidity levels in which honey bees thrive and which prevent Varroa from breeding. So if we can redesign beekeeper hives to recreate these conditions, we could help stop the parasite and give honey bees a chance to recover.

The life of the honey bee colony is intimately entwined with its home. We can see this from the sophisticated way honey bees choose nests of the correct sizes and properties, and how hard they work to modify them. In fact, the nest can be seen as part of the honey bee itself, a concept that in biology is known as an “extended phenotype”, which refers to all the ways a creature’s genes affect the world.

The honey bees select a tree hollow with an entrance at the bottom that makes rising hot air inside the nest less likely to escape. They then modify it by applying an antibacterial vapour-retarding sealant of tree resin over the inside walls and any small holes or cracks. This further prevents any warm air leaks and helps maintain the right level of water vapour. Inside the nest, the bees build a honeycomb containing thousands of cells, each of which provides an insulated microclimate for growing larvae (baby bees) or making honey.

Despite the importance of nests to honey bees, the hives we build them bear little resemblance and have few of the properties of the natural tree nests European honey bees evolved with. In the 21st century, we’re still using hives designed in the 1930s and 1940s, based on ideas from the 1850s. Natural nests were only scientifically surveyed as recently as 1974 and research into their physical properties only began in 2012.

Man-made hives are squat and squarish (for example 45cm high), constructed from thin wood (under 2cm thick) with large entrances (around 60cm²) and often large openings of wire mesh underneath. They were designed to be cheap and for beekeepers to easily access the bees and remove the honey. In contrast, European honey bees evolved with natural tree nests that are on average tall (around 150cm), narrow (20cm) with thick walls (15cm) and small entrances (7cm²). 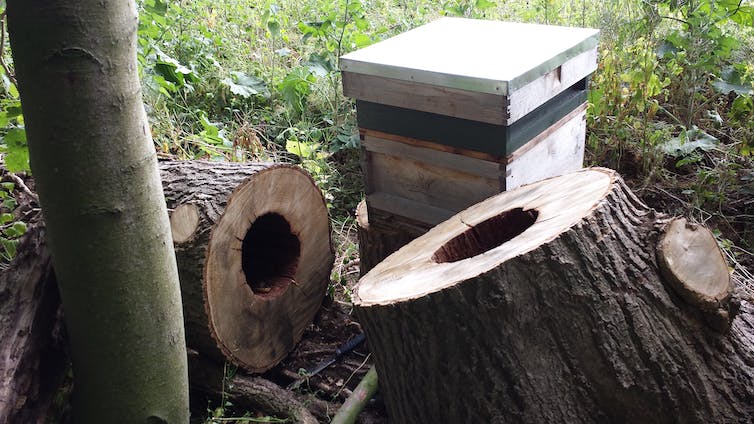 In order to assess how well man-made hives recreate the conditions of natural nests, I needed to measure the flow of fluids (air, water vapour and heat) around them. To do that, I turned to an aspect of physical science and engineering called thermofluids, the study of liquids, gases and solids of combustion, and changes of state, mass and energy movement.

In the honey bee nest, this means the “combustion” of sugars in honey and nectar, the evaporation and condensation of water, and air flow through the nest. It also includes everything being transported by the honey bees through the entrance or leaking through the walls.

The various barriers that honey bee nests create can be used as convenient boundaries in mathematical models of the energy needed and humidity produced inside the nest. My new study combines these models with data from experimental research on the thermal properties of honey bee nests and hives and behavioural studies on how honey bees ventilate their nest.

This enabled me to compare the average humidity in man-made hives and tree nests with that needed by honey bees and their parasites. I found that most man-made hives have seven times higher heat loss and eight times bigger entrance size than tree nests. This creates the lower humidity levels that favour the parasite.

My research shows the role of the honey bee nest is clearly far more sophisticated than just simple shelter. Simple changes to hive design in order to lower heat loss and increase humidity, for example using smaller entrances and thicker walls, could reduce the stress on the honey bee colonies caused by Varroa Destructor. We already know that simply building hives from polystyrene instead of wood can significantly increase the survival rate and honey yield of the bees. More research into the thermofluidic complexity of nests would allow us to design the optimal hives that balance the needs of honey bees with their human keepers.