Swedish retail sales rise above expectations in May 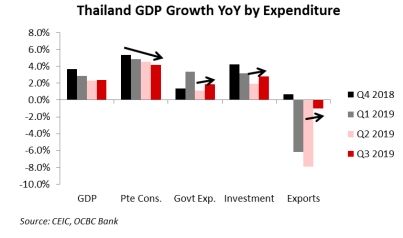 Thailand’s full-year 2019 growth has been downgraded to 2.7 percent by OCBC Treasury Research, a shade lower than the previous estimate of 2.8 percent, while the 2020 GDP growth rate remained unchanged at 2.9 percent.

The trickle-down effects of the THB316 billion programme in August are likely to continue working its way through the economy and should provide a boost to private consumption in Q4. Thailand’s Q3 GDP rose 2.4 percent y/y, coming in below expectations of 2.7 percent.

Private consumption, however, slid to 4.2 percent y/y in Q3, marking the fourth consecutive quarter of falling growth in a segment that comprises about 50 percent of total GDP in Thailand. Exports remained in contraction, as largely expected, but the pace of slowdown has declined.

The THB316 billion stimulus unveiled in August probably contributed to the better-than-expected government expenditure and investment segments. As it appears, it will still require more time for the effects of that stimulus to filter into household spending.

Q4’s private consumption growth would have to boast a number higher than Q3’s 4.2 percent to prove that the stimulus is effective and that the Thai economy has bottomed out, after a year of monetary easing and expansionary fiscal policies, the report added.

"Together with the rebound in investments and the stabilisation in exports, we think this provides a base for Thailand’s economy to find its footing going into 2020," OCBC Treasury Research further commented in the report.