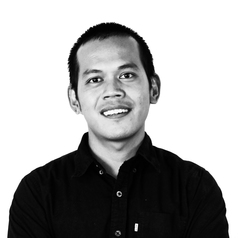 Indonesia’s Ministry of Environment and Forestry has failed to communicate the risk of air pollution in the capital, Jakarta, and surrounding areas.

Data presented on the ministry’s website shows Jakarta has good air quality, making it unnecessary to warn the public about health risks from filthy air. But data from Swiss-based app AQ AirVisual tell a different story.

According to their data, sourced from the US embassy’s air quality monitors, Indonesia’s climate agency and Greenpeace Indonesia, Jakarta and its neighbouring province Banten have some of the world’s filthiest air. This poses health risks to residents.

The ministry responded to this information by saying it’s confident that AQ AirVisual data is not accurate.

The conflicting information creates public distrust of the government, prompting a group of citizens to sue the government over growing air pollution.

The ministry regularly monitors air quality in Indonesia through devices installed in several strategic places, such as roads or other crowded areas.

This Air Pollution Index uses a scale of 0 to 300, – the website put 3,000 as maximum. If the monitors read that the air quality stands between 0 and 51, that means the air is clean. If the monitors read air quality levels between 51 and 100, there’s moderate pollution. Readings between 101 and 199 mean the air can cause illness and between 200 and 299 the air is very unhealthy. If the air quality level reaches 300, that spells danger.

Based on the air quality assessment update of July 16 2019 at 9 am, Jakarta and Banten stand at 58 to 78. This level falls in the moderate category. 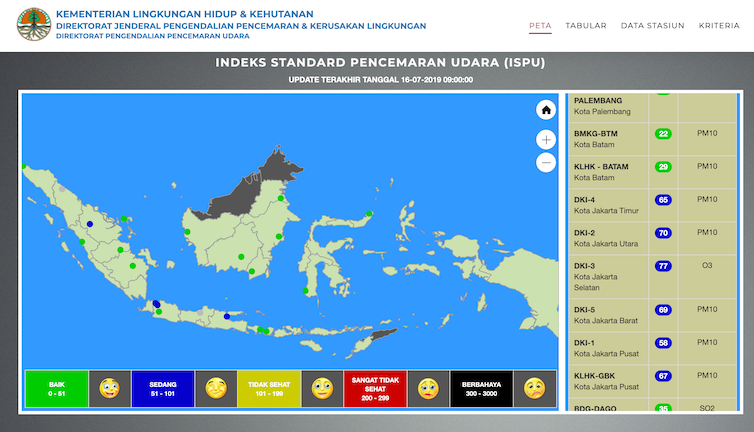 Jakarta’s air quality based on the Ministry of Environment and Forestry per 16 July 2019. Source : http://iku.menlhk.go.id/

According to the ministry, air quality that falls in the moderate level “would give no effect to human and animal health, but will affect sensitive plants and aesthetic value”.

Meanwhile, AQ AirVisual uses the United States Air Quality Index (US AQI), one of the most recognised air quality standards in the world. The US AQI converts concentrations of pollutants in the air into a colour-coded scale of 0-500, to easily represent the level of associated health risk.

Serpong of Banten province air quality as per 16 July 2019. https://www.airvisual.com/

The US AQI’s standard for Particulate Matter 2.5 (PM2.5), one of four common air pollutants with a diameter less than 2.5 micrometres, or smaller than a human hair, is slightly higher than standards applied by WHO.

If we follow the US AQI standards, Jakarta and Banten, which score 151-200, fall into the “unhealthy” category.

Apart from real-time air quality data, the app also provides health risk information for each score. For instance, when the air is considered “unhealthy” the app provides information that infants and the elderly might experience heart and lung problems. At this level, it recommends people limit outdoor activities and wear pollution masks.

Clean air as an environmental right

Everyone has environmental rights to a safe, clean, healthy and sustainable environment, along with the right to seek, receive and impart environmental information.

The government’s insistence that air pollution is under control creates misleading information and confusion. Several mass media have reported air pollution issues caused by private transportation (such as cars and motorcycles) and industrial activities.

Understanding and communicating the risk of air pollution is highly important to warn the public about how it can impact them. The public has a right to know about their current environmental situation and receive clear information, not confusing or misleading information.

In this current situation, the government has failed to communicate the risk and neglected to inform and provide comprehensive environmental data assessment to the public.

Experts can carry out risk communication by using social media, mass media and community engagement channels. They can communicate and share real-time information with the public whose health, economic or social well-being is threatened. This may increase public awareness and help people respond appropriately to protect themselves.