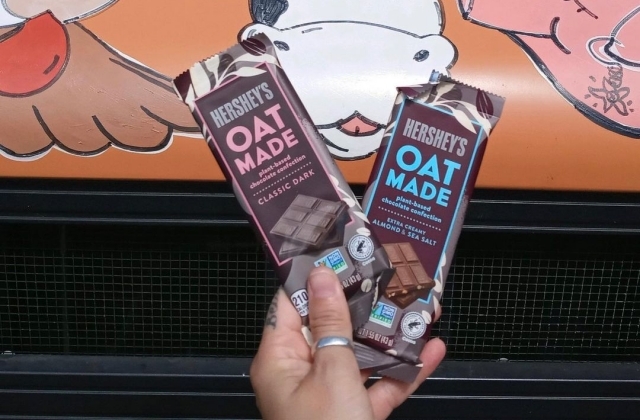 Hershey’s will be launching its first plant-based chocolate bar and in testing but somehow made its way to a store now for public consumption. The famous chocolate maker just reinvented its milk chocolate bars while also diving into the trend of producing “vegan” food items.

It was reported that the Hershey’s Company produced its vegan chocolate bar without using dairy and replacing this with oat milk to achieve richness similar to the regular bars. As mentioned on Food Dive, the firm released two Hershey’s Oat Made bars and these are the Classic Dark Chocolate and Extra Creamy Almond Sea Salt flavors.

It was added that the Soul Miner’s Garden, a vegan food truck in Charlotte, North Carolina, was the first place to offer the Hershey’s Oat Made chocolate bars. This reportedly happened due to an error in the distribution of the new products.

Apparently, Hershey’s is still testing these plant-based chocolate bars in some markets but went on sale in Charlotte because of an error. In any case, the new vegan chocos are expected to be available soon in limited distribution at select retail outlets in the U.S. The chocolates will initially be on the market until June 2022 and will officially be marketed depending on the results of its in-market testing.

Dan Mohnshine, Hershey’s team lead of strategic growth platforms, said that they have developed the Hershey’s Oat Made chocolates so there will be improved plant-based options in the market.

“It’s so important for us to test for reality, that we’re intentionally planning a marginal level of advertising delivered to certain geographic areas for the Hershey's Oat Made products,” Specialty Food quoted Mohnshine as saying in a statement. “In fact, should they make it to market, it may be under a different moniker as we’re still testing out whether to use the current ‘Oat Made’ name or simply call them ‘plant-based.’”

Meanwhile, Hershey’s is said to be moving aggressively for its “better for you” (BFY) line that was created to provide customers with healthier options for confectionery products. It is focusing on producing low-sugar, organic, sugar-free versions of its classic chocolate lineup.