FxWirePro: The Key Driving Forces of Surge in Gold Prices and Spotlight on ETFs 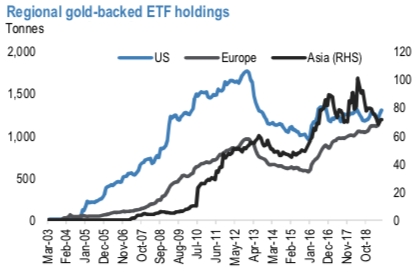 Gold has once again recovered slightly after hitting a low of $1486 yesterday. Markets awaited ECB policy today for further direction. The central bank is expected to restart asset purchases by 30 or 50 bn and to cut deposit rates by 20 bps. The yellow metal will show an upside traction if they announce a stimulus package. It is currently trading around $1496.50.

With gold price up over 20% YTD, the question is whether we are at the cusp of a new decade-long Golden Era for precious metals or in the midst of the usual end-cycle appreciation.

Four main driving forces contributed to the seven-fold surge in the gold price in the first decade of this century, namely:

The analysis concludes that out of the four drivers, the launch of the gold-backed exchange-traded products and the collapse in real yields were likely the main contributors to gold’s 618% price surge from a low of $255/oz in February 2001 to its peak of $1,888/oz in August 2011.

Gold ETFs retracement to previous highs could potentially boost up the gold price by around $100/oz. In the sixteen years since the launch of the first gold exchange-traded product, gold ETFs have transformed the gold investment market. They have reduced the cost of ownership, increased efficiencies and provided added liquidity and access. It is a well-established investment vehicle with 110 gold ETFs available presently. Collectively, as of July 31, 2019, they held about 2,600 tonnes of gold, worth a value of $120 billion (refer above chart).

With assets under management at this level, total gold ETFs now rival some major central banks in holdings, falling just behind the US, Germany and the IMF but ahead of Italy and France. Presently, gold-backed exchange-traded products are also well-diversified regionally. While the US and Europe account for the lion’s share of assets under management, ETFs in Asia have considerably grown, too.

Technically, the gold price is heading towards the strong support at $1,478 and any breach below to drag slumps in the minor trend, in which case, a downswing till $1,461/$1,440 likely event.

The interim resistance is around $1,500 level and break-out above likely to expose upside traction towards $1515-25 areas. On a broader perspective, major bullish persistence only above $1,555 level. Courtesy: JPM