FxWirePro- Gold Vs US bond yield 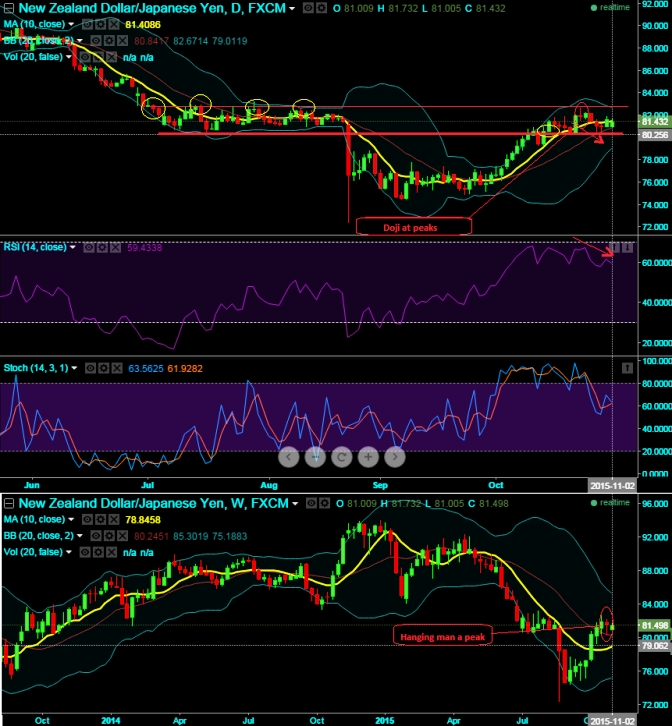 As shown on the daily charts, it has not been able to break this level quite a lot times in the recent past, and same does the support levels at 80.850, you can observe how the price behavior of this pair on either side after breaching this level in the recent historical evidences (see yellow circled areas).

More importantly, the formation of bearish patterns like hanging man and doji candles at 81.648 and 81.923 levels on weekly and daily charts respectively signifies weakness in previous rallies, looks like bulls have exhausted and given up.

The RSI oscillator has begun diverging at around 67 levels which is near overbought territory to the previous upswing rallies. This would mean that selling pressures are piling up.

Subsequently, %D crossover above 80's intensifies bears interests in the market, as a result we've seen today's lows at 81.005 to break the above support zone.

Intraday prices are attempting to slip below 10DMA which is again one more bearish indication. However, closing basis should be closely monitored.

If it does not manage to hold onto this level we could see near strong support only at 79.495 levels. Even if it shows upside potential we would still be safe but medium term it has to drop back.

Although we've been observing some bounces we could see with a dubious eyes on Kiwi fundamentals which are not that conducive and hence, we maintain long term bearish trend in our opinion.