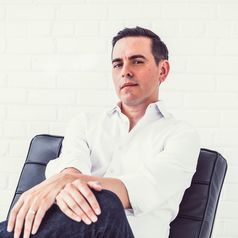 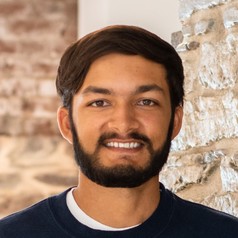 From its ostensible origins in Wuhan, China, in late 2019, COVID-19 has spread across the globe. There are now a staggering 11.5 million cases worldwide, resulting in over half a million deaths. March saw the pandemic’s beginnings in Canada and the United States, followed by widespread lockdowns meant to slow the progression of the virus.

While the number of new daily cases in Canada is declining, U.S. cases have reached record highs. The U.S. represents four per cent of the world’s population, but accounts for one-quarter of COVID-19 cases and deaths. As of July 8, 2020, there were 9,051 cases per million people in the U.S. compared to 2,812 cases per million in Canada. These statistics point to a substantial difference in community spread in the two countries.

There’s a significant difference in how the two leaders have talked about this virus on Twitter. One has focused more on politics, while the other has focused on policy and public health.

We conducted a quantitative analysis of themes emerging in Trudeau’s and Trump’s tweets during the COVID-19 pandemic. Our study used network science, which considers systems and their interactions. We formed what are called “co-occurrence networks” based on keywords taken from tweets, with two keywords linked if they appear in the same tweet. For example, if the keywords “covid19” and “pandemic” appear in the same tweet, then they were linked. The monthly top 100 keywords from @JustinTrudeau and @realDonaldTrump were extracted based on their frequency.

To simplify the networks, we removed retweets and common stop words such as “the” and “at.” We created visualizations of the networks to group the keywords into thematically related clusters or communities. We find a higher proportion of links inside communities and a sparser set of links between them. 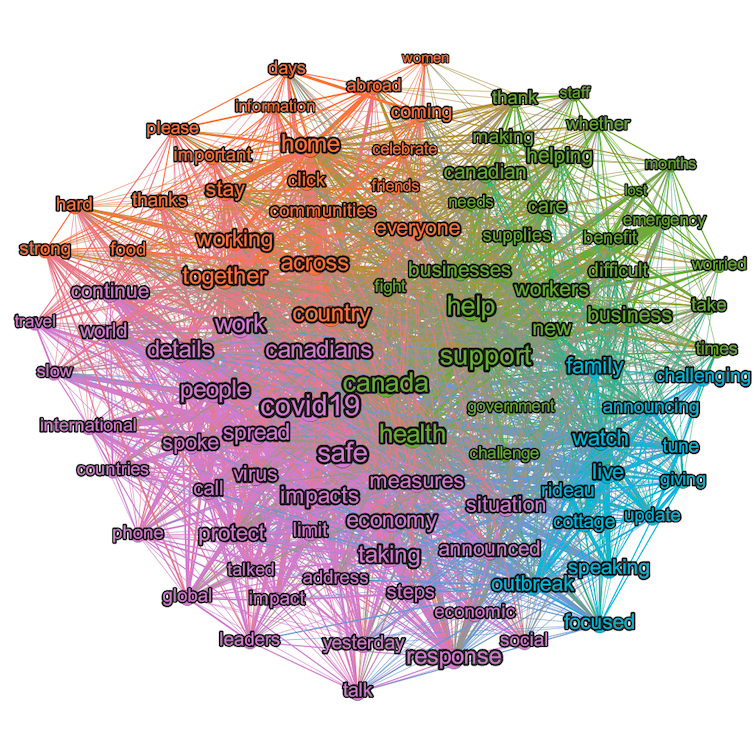 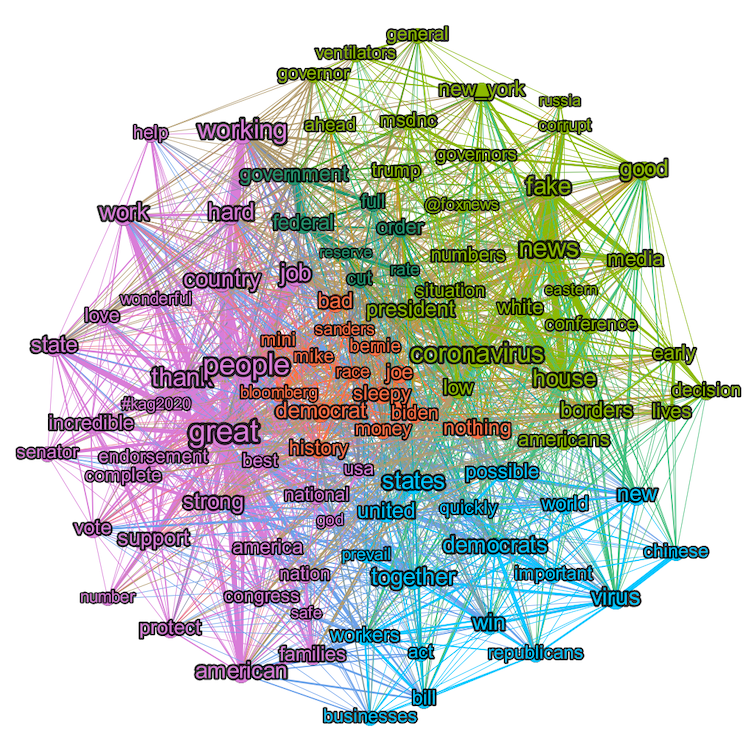 The algorithm extracted the communities in the keywords. Keywords and links were scaled up or down in size depending on their frequency. Communities of keywords were assigned colours such as blue, green and orange, and more correlated keywords were located closer together in the network.

Looking back at the first two months of 2020, Trudeau’s and Trump’s tweets were unrelated to COVID-19. Trudeau focused on the shooting down of the passenger plane in Iran that had 57 Canadian citizens on board, followed by protests for the Wet’suwet’en First Nation. Trump focused on his impeachment trial and endorsing candidates in Republican congressional primaries.

In March, the federal government’s response to COVID-19 dominated Trudeau’s Twitter keywords. In contrast, other topics competed for prevalence in Trump’s tweets. These included tweets about fake news (closely situated to “coronavirus” in the keyword network) and perceived unfairness from the Democrats.

Claims of fake news coverage of the severity of the pandemic dominated Trump’s April tweets. Trudeau’s tweets centred on topics such as wage subsidies and appreciation for front-line workers. 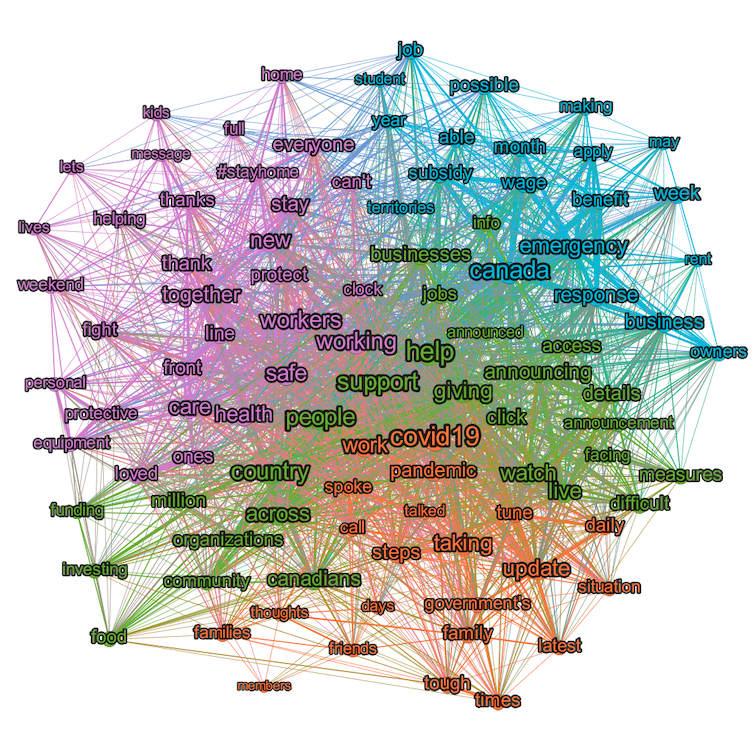 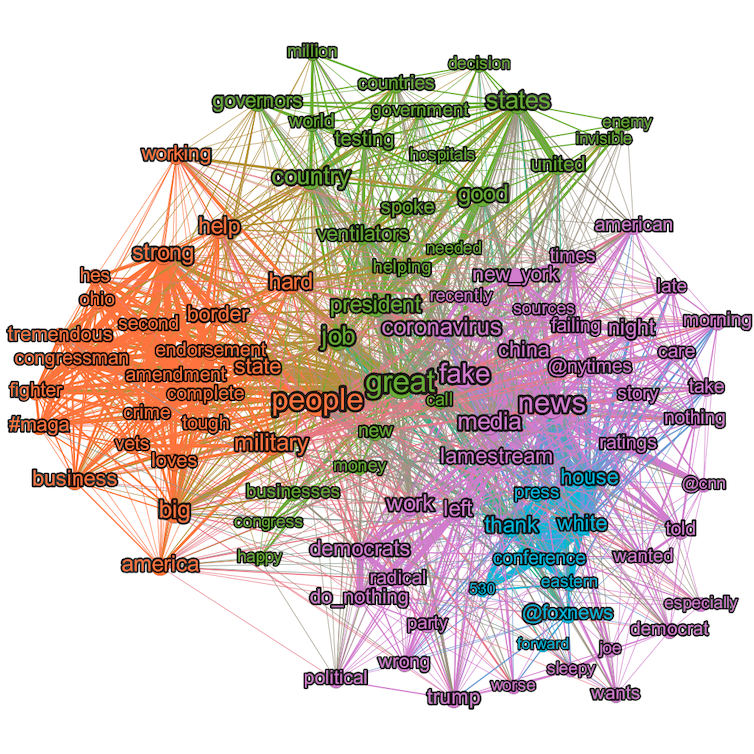 In May and June, keywords from Trump’s tweets revolved around Obamagate, Republican endorsements and transit funding. 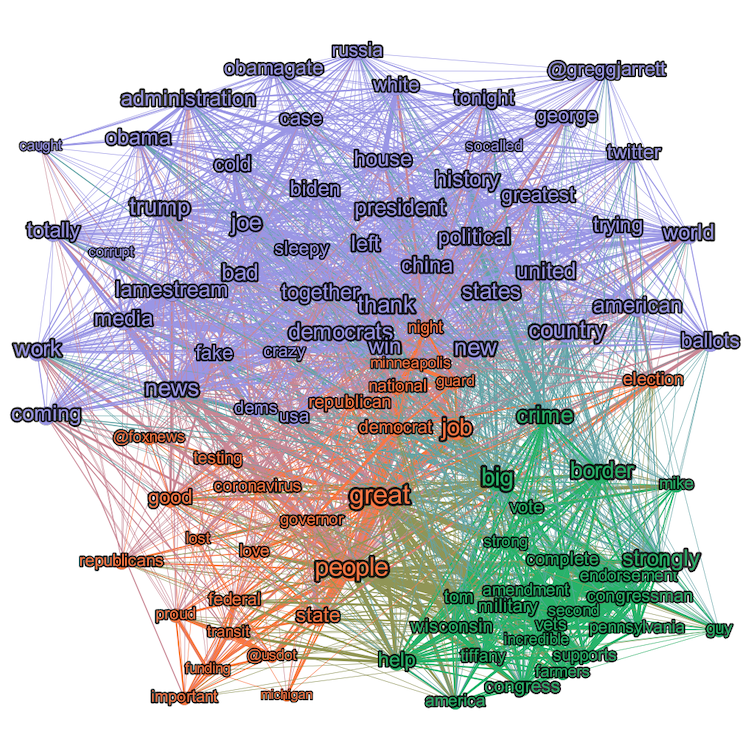 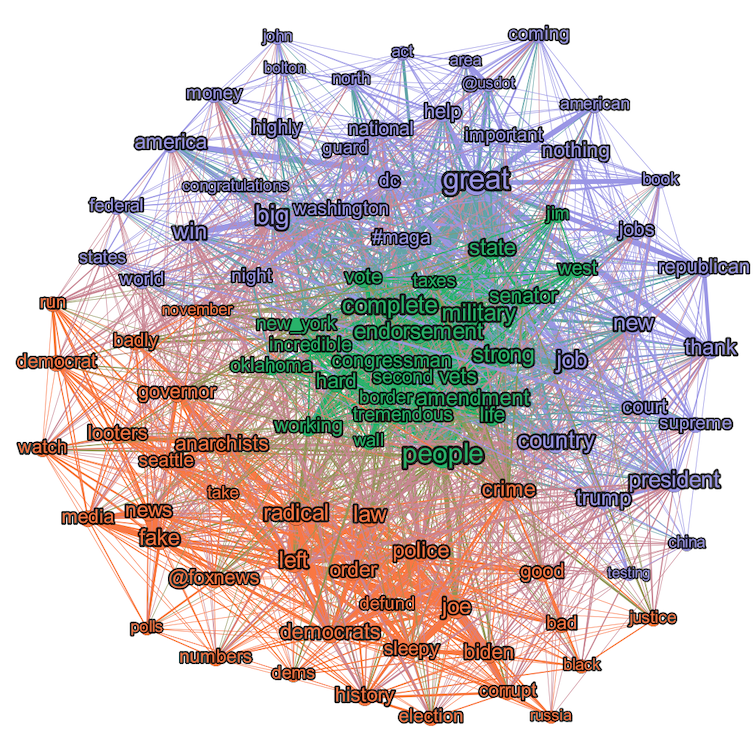 Trudeau’s keyword networks for both months were in stark contrast to Trump’s, with keywords related to the virus remaining prevalent.

What the networks tell us

The keyword networks from March to June point to divergent messaging on the pandemic by the two leaders, as reflected in their tweets. While both leaders focused on COVID-19 in their March tweets, Trump did increasingly less so over the coming months. His reference to the virus was often through a political lens, with keywords related to the media or Democratic rivals.

For each month we considered, the keywords fell into a small collection of communities, ranging from three to five. These observations are consistent with an earlier analysis of Trump’s tweets around his election.

Trump famously made comments downplaying the pandemic in its early days, and made subsequent statements referencing progress controlling the pandemic, despite a record number of new cases. The early reopening of U.S. states may have been a possible cause for increased cases.

In contrast, Trudeau has stayed consistent in his daily briefings and tweets since lockdowns began in March, highlighting economic recovery programs and providing public health-care information. 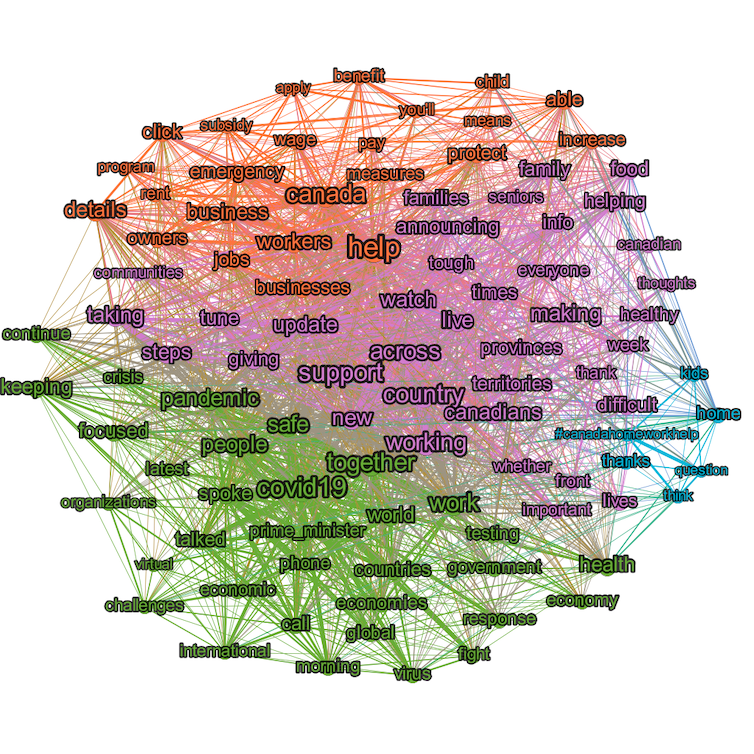 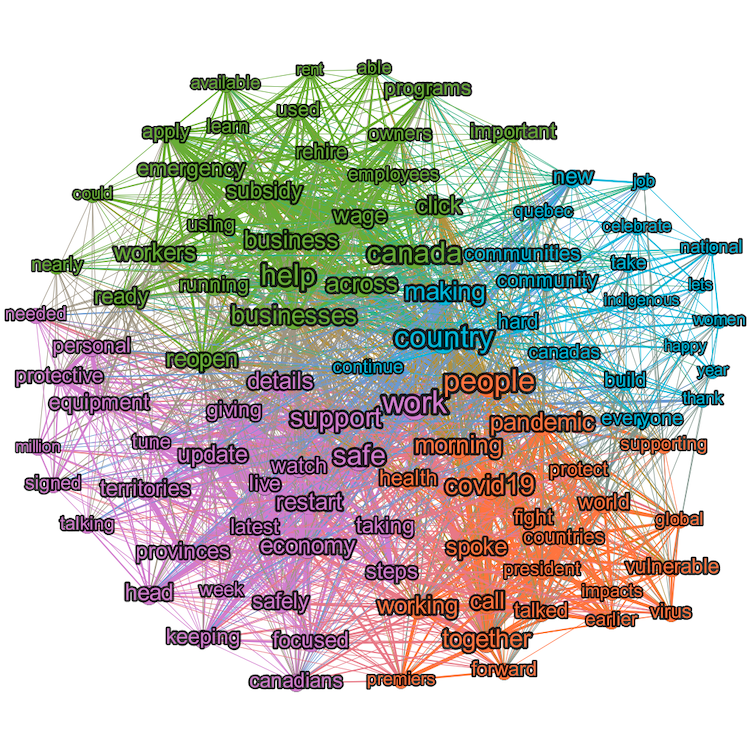 Interestingly, Trudeau’s minority government has been enjoying a surge in popularity, while polls suggest rising disapproval of the Trump administration’s handling of the pandemic.

As the COVID-19 becomes part of the new normal, there is greater public awareness of the effectiveness of lockdowns and actions needed to curb the spread of the virus such as social distancing, hand-washing, and wearing masks. However, not everyone is willing to comply.

Our network analysis suggests that consistent social media messaging by federal leadership may play a role in influencing views of the pandemic and efforts to contain it. We hope that political leaders with large platforms will use them to amplify the advice of medical professionals and help slow the spread of the virus.