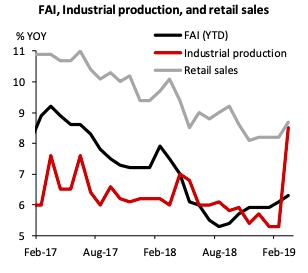 China’s gross domestic product (GDP) is expected to further witness a solid outcome in the second quarter of this year, which should offer further crucial support to the global growth picture, according to the latest report from DBS Group Research.

Other investments include intercity transportation, utilities, civil & general aviation as well as next generation information infrastructure. Officials have approved a large number of projects since December 2018.

Local land sales, a primary source of LG funding, have come under pressure this year as the property market cools off. A VAT cut of up to Rmb2 trillion also depresses local tax revenues.

The PMI’s employment component of the nonmanufacturing sector – where the bulk of the workforce is employed – remained in the contractionary zone for seven consecutive months. Its manufacturing counterpart also hovered near the lowest level in 7 years.

Weak labour market and tepid income growth have dampened consumer sentiment. According to the PBoC’s Urban Depositor Survey, the proportion of respondents who intended to “save more” has, over a quarter, increased by 0.9ppt to 45 percent in Q1’19. Households were also less optimistic on the outlook for property prices.

Home-related expenditure from furniture to electric & video appliances may remain lacklustre. Nonetheless, the recent increase in personal income tax threshold and expansion in deductibles is expected to lift households’ income by about 3 percent. Consumer confidence should also get a lift from the buoyant stock markets, the report further noted.

Exports jumped to five-month high last month, though the scale of the rebound was partly due to the different timing of Lunar New Year and hefty price increases. Specifically, export prices rose 4.4 percent in Q1, contributing 66.3 percent of export growth.

Emerging evidence of stimulus efficacy suggests that consumer expectation and investor confidence remain constructive. Consumption, in particular, is amenable to responding to well-targeted measures, as seen in the recent rebound in loans and retail sales figures.

This is a major source of comfort for China’s outlook as growth trends lower. Meanwhile, if growth deceleration becomes disorderly, the authorities will have the confidence that they have sufficient tools in their arsenal to stabilise the economy without having to sacrifice corporate deleveraging and associated moral hazard issue, DBS Research added in its report.