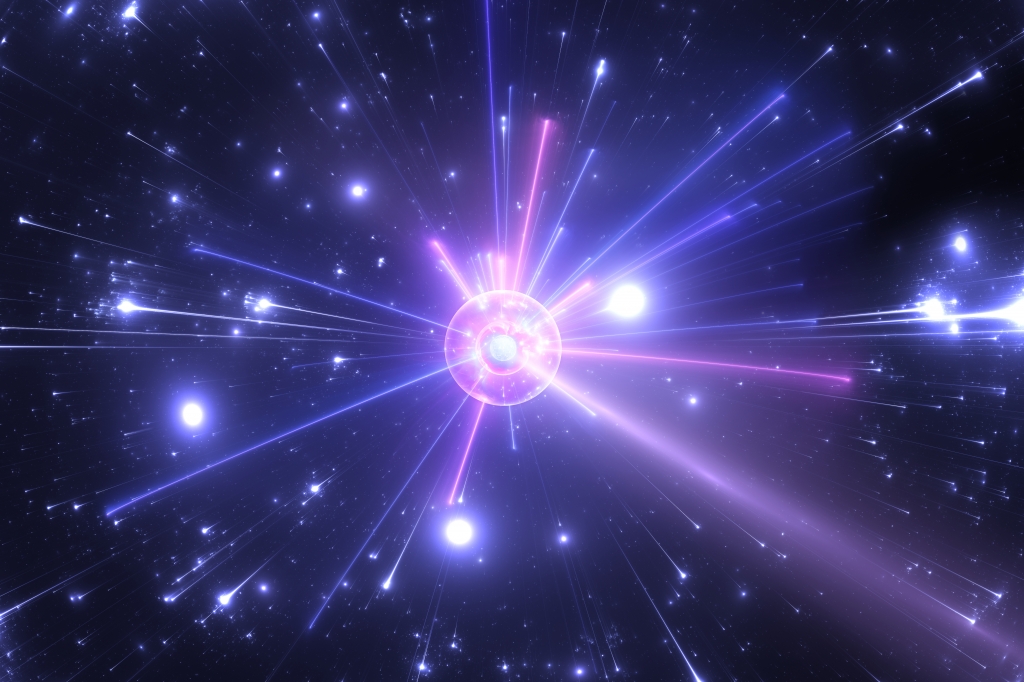 What happened at the beginning of the universe, in the very first moments? The truth is, we don’t really know because it takes huge amounts of energy and precision to recreate and understand the cosmos on such short timescales in the lab. But scientists at the Large Hadron Collider (LHC) at CERN, Switzerland aren’t giving up.

Now our LHCb experiment has measured one of the smallest difference in mass between two particles ever, which will allow us to discover much more about our enigmatic cosmic origins.

The Standard Model of particle physics describes the fundamental particles which make up the universe, and the forces that act between them. The elementary particles include quarks, of which there are six – up, down, strange, charm, top and bottom. Similarly there are six “leptons” which include the electron, a heavier cousin called the muon, and the still heavier tau, each of which has an associated neutrino. There are also “antimatter partners” of all quarks and leptons which are identical particles apart from an opposite charge.

The Standard Model is experimentally verified to an incredible degree of accuracy but has some significant shortcomings. 13.8 billion years ago, the universe was created in the Big Bang. The theory suggests this event should have produced equal amounts of matter and “antimatter”. Yet today, the universe is almost entirely made up of matter. And that’s lucky, because antimatter and matter annihilate in a flash of energy when they meet.

One of the biggest open questions in physics today is why is there more matter than antimatter. Were there processes at play in the early universe that favoured matter over antimatter? To get closer to the answer, we have studied a process where matter transforms into antimatter and vice versa.

Quarks are bound together to form particles called baryons – including the protons and neutrons that make up the atomic nucleus – or mesons, which consist of quark-antiquark pairs. Mesons with zero electric charge continually undergo a phenomenon called mixing by which they spontaneously change into their antimatter particle, and vice versa. In this process, the quark turns into an anti-quark and the anti-quark turns into a quark.

It can do this because of quantum mechanics, which governs the universe on the tiniest of scales. According to this counter-intuitive theory, particles can be in many different states at the same time, essentially being a mix of many different particles – a feature called superposition. It is only when you measure its state that it “picks” one of them. A type of meson called D0, for example, which contains charm quarks, is in a superposition of two normal matter particles called D1 and D2. The rate at which the D0 meson turns into its anti-particle and back again, an oscillation, depends on the difference in masses of D1 and D2.

It is difficult to measure mixing in D0 mesons, but it was done for the first time in 2007. However, until now, nobody has reliably measured the mass difference between D1 and D2 that determines how quickly the D0 oscillates into its antiparticle. 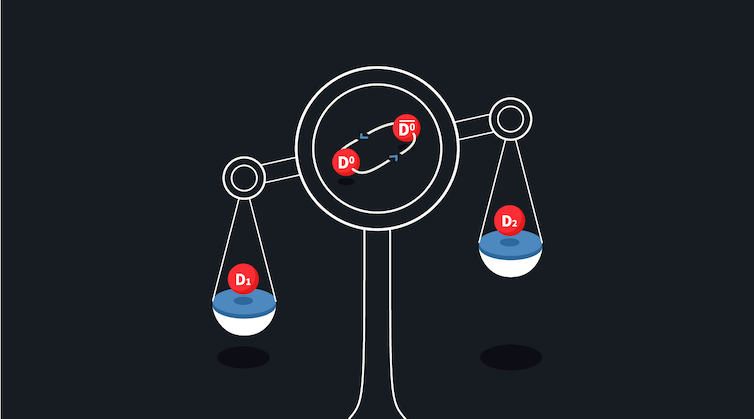 The D1 and D2 mesons, which are a manifestation of the quantum superposition of the D0 particle and its antiparticle. Cern

Our latest discovery, announced at the Charm conference, changes this. We measured a parameter that corresponds to a mass difference of 6.4x10-6 electron Volts (a measure of energy) or 10-38 grams – one of the smallest mass differences between two particles ever measured.

We then calculated that the oscillation between the D0 and its antimatter partner takes around 630 picoseconds (1 ps = 1 millionth millionth of a second). This may seem fast, but the D0 meson doesn’t live long – it isn’t stable in the lab and falls apart (decays) into other particles after only 0.4 picoseconds. So it will typically disappear long before this oscillation occurs, posing a serious experimental challenge.

The key is precision. We know from theory that these oscillations follow the path of a a familiar type of wave (sinusoidal). Measuring the start of the wave very precisely, we can infer its full period as we know its shape. The measurement therefore had to reach record precision on several fronts. This is made possible by the unprecedented amount of charm particles produced at the LHC.

But why is this important? To understand why the universe produced less antimatter than matter we need to learn more about the asymmetry in the production of the two, a process known as CP-violation. It has already been shown that some unstable particles decay in a different way to their corresponding antimatter particle. This may have contributed to the abundance of matter in the universe – with previous discoveries of it leading to Nobel Prizes.

We also want to find CP-violation in the process of mixing. If we start with millions of D0 particles and millions of D0 antiparticles, will we end up with more D0 normal matter particles after some time? Knowing the oscillation rate is a key step towards this goal. While we did not find an asymmetry this time, our result and further precision measurements can help us find it in the future.

Next year, the LHC will switch on after a long shut down and the new upgraded LHCb detector will take much more data, boosting the sensitivity of these measurements further. Meanwhile, theoretical physicists are working on new calculations to interpret this result. The LHCb physics programme will also be complemented by the Belle-II experiment in Japan. These are exciting prospects for investigating matter-antimatter asymmetry and the oscillations of mesons.

While we cannot yet completely solve the mysteries of the universe, our latest discovery has put the next piece in the puzzle. The new upgraded LHCb detector will open the door to an era of precision measurements that have the potential to uncover yet unknown phenomena – and perhaps physics beyond the Standard Model.

Sascha Stahl does not work for, consult, own shares in or receive funding from any company or organisation that would benefit from this article, and has disclosed no relevant affiliations beyond their academic appointment.