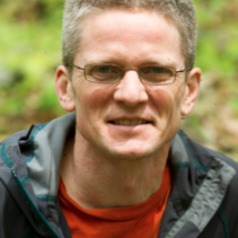 It was a dark time for animals. Poaching was rampant. Wild birds and mammals were being slaughtered by the thousands. An out-of-control wildlife trade was making once-common animals hard to find and pushing rare species into extinction.

This is the story of North America a century ago, and of Asia today. But there was a surprise ending in America, and I believe there could be one in Asia.

Today North America has abundant wildlife. Much of my research as a wildlife biologist focuses on documenting the rebound of species that once were hunted into scarcity, including wolves, deer and fishers.

This is the outcome of what I call the North American wildlife conservation miracle. A century ago, with many species on the brink of extinction, people here stopped overusing wildlife and created a new culture of conservation.

Today unregulated wildlife trade in Asia is decimating species in much of the world, and now even threatens humans through the likely spillover of the SARS-CoV-2 virus from bats or pangolins to humans. Suddenly the harm caused by this rampant wildlife trade is in the spotlight, which creates an opportunity to pull off a conservation miracle in Asia. I hope lessons from the American experience can help.

In the late 1800s and early 1900s the seemingly endless bounty of America’s wildlife began to run out. By 1878, three northeast species – the Labrador duck, great auk and sea mink – went extinct. The eastern elk, the largest mammal in most eastern states, followed in the 1880s. Even highly resilient species like white-tailed deer and Canada goose declined sharply. Bison once numbered 30 million, but were down to a few hundred animals by the late 1880s.

The pioneer delusion of endless bounty was replaced by an acceptance that there was nothing they could do about it. American settlers had a “manifest destiny” mindset, believing they were destined to expand across the continent, and accepted that the loss of other species was an inevitable consequence of that.

Then the bison didn’t go extinct. 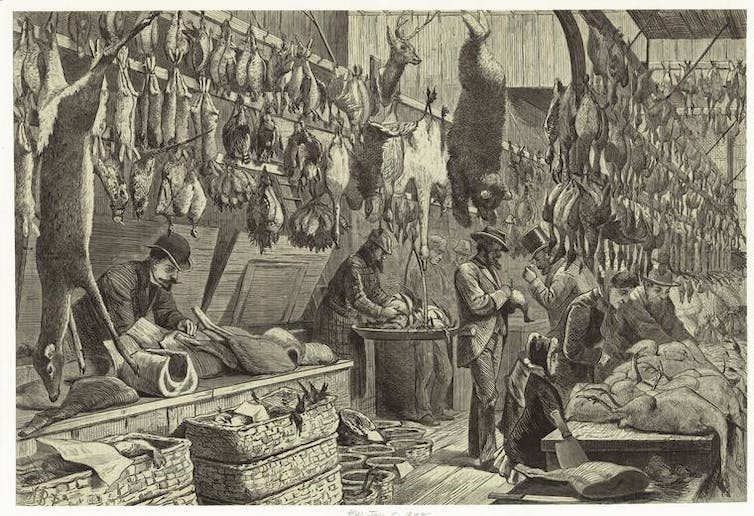 ‘The Christmas Season,’ 1878, an engraving by Arthur Burdett Frost of a wild game stand at New York City’s Fulton Market showing a bear, deer and many types of birds. NYPL

Back from the brink

For some Americans, including Theodore Roosevelt, the prospect of erasing an iconic species like bison was a call to action. They formed the American Bison Society, which bred bison at New York’s Bronx Zoo and shipped them west in hope of repopulating their former ranges.

As president, Roosevelt helped create some of the first national wildlife refuges and signed laws restricting the wildlife trade. But the bulk of the work was done by states and individuals.

Americans spoke out against large-scale hunting. George Bird Grinnell, editor of the sporting journal Forest and Stream, used the magazine as a platform to call for protecting birds. Grinnell later teamed with Teddy Roosevelt to create the Boone and Crockett Club, a group of conservation-minded hunters. Two Boston socialites, Harriet Hemenway and Minna Hall, formed the Massachusetts Audubon Society and worked to end the custom of adorning ladies’ hats with plumes from wild birds.

By the 1930s every state had a wildlife agency funded by taxes and hunting license fees. These agencies shut down most wildlife harvests, protected and restored habitat and reintroduced animals that had been eradicated, such as turkeys and otters. 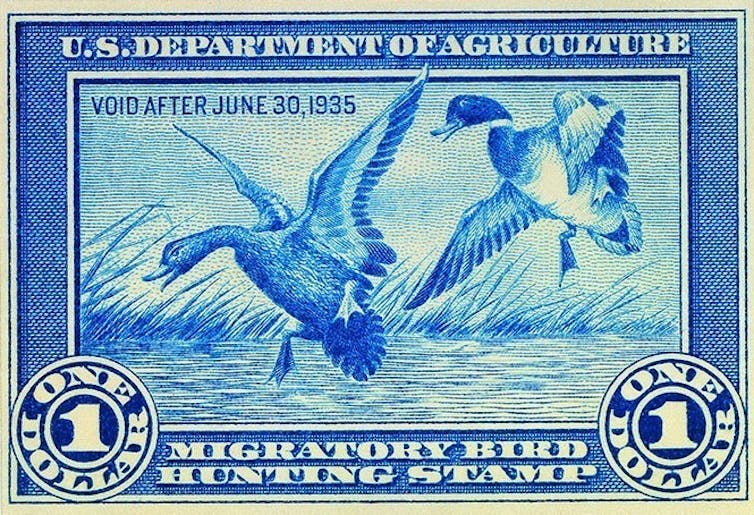 The first U.S. ‘duck stamp,’ issued by the federal government in 1934. Purchase of a current duck stamp is required to hunt migratory waterbirds, with proceeds funding migratory bird conservation. USFWS

When hunting resumed, states managed when it could take place and how many animals a person could harvest. Ecology was a new field, and scientists like Aldo Leopold adapted its principles to create wildlife management as a new branch of study that could help inform these regulations.

Today deer, turkey, bear, elk, ducks and geese are abundant in many parts of North America. State governments carefully regulate harvests. Wildlife is not sold commercially for food in the U.S., unlike Australia and much of Europe. Trapping and sale of fur-bearing animals like beaver and fisher is managed sustainably.

Of course, wildlife conservation in North America still faces serious challenges, including habitat loss, climate change and pollution. But unsustainable hunting is no longer a problem, and legal hunting helps fund conservation for all species.

Over the last 20 years, demand for wildlife products in Asia has driven a collapse of animal populations there, as well as in Africa and Latin America. Most larger mammal species outside of North America today are primarily threatened by poaching for food, art and traditional medicines of dubious effectiveness.

But it seems no species have been safe from this scourge. Consumers will pay high prices for exotic dishes like braised salamander and soup made from the swim bladder of the totoaba, a giant Mexican fish.

Conservationists hope to seize on the tragedy of the SARS-Cov-2 spillover to end the global wildlife trade, or at least regulate it more tightly. What lessons can the North American experience offer?

First, it is critical to reduce demand. This was a slow process a century ago. But COVID-19 has cast a stigma on wildlife products that could help turn the tide in Asia, just as public shaming in the U.S. helped end demand for things like feather hats and fur from spotted cats.

Today animal welfare advocates are using social media to urge Asian consumers to avoid products made from endangered animals. In response to efforts like these, China banned domestic sales of ivory in 2017, and Chinese consumption of shark fin soup has declined sharply over the past decade.

Second, this effort will involve many players, including national governments, regional authorities and nongoverment organizations like Save Vietnam’s Wildlife, Bat Conservation India Trust and Save Pangolins. These groups understand local culture and politics, and can connect directly with communities where wildlife is hunted and sold.

Finally, we need some optimism. The persistence of the bison a century ago showed Americans that extinction wasn’t the only option. It is important now to monitor wildlife populations so that efforts can target species most at risk, and to celebrate recoveries that might be early signs of a second conservation miracle.