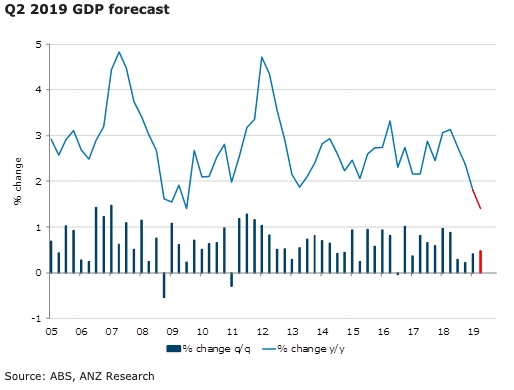 After the release of key partial indicators this week, Australia’s gross domestic product (GDP) for the second quarter of this year is expected to rise 0.5 percent q/q. This would see annual growth edge down to 1.4 percent which would be the slowest pace since the GST, according to the latest report from ANZ Research.

The headline growth number, however, belies the underlying weakness in the economy. Private demand looks to have fallen by 0.3 percent q/q in Q2 following a similar fall in Q1, to be down 0.6 percent over the year.

The mainstay of economic growth at the moment is public demand, which looks to have contributed 1.6ppt to annual growth. This highlights the difficulty for the government and the RBA, in generating measures to support the economy when public spending is already the key driver of growth.

GDP growth, at +0.5 percent q/q and +1.4 percent y/y, would be lower than the RBA expected a month ago. In its August Statement on Monetary Policy, the Bank’s June forecast was +1.7 percent y/y requiring growth of 0.8 percent q/q in Q2.

For the RBA, the surprise weakness looks to have come from the private domestic economy. In particular, dwelling investment and business investment both look to be significantly weaker than the RBA anticipated.

In the GDP report tomorrow, the focus will once again be on the household indicators – consumption and income. Soft retail sales volumes (+0.2 percent q/q) point to relatively modest growth in consumer spending.

While retail spending accounts for only around 30 percent of consumption, the earlier fall in house prices and ongoing soft income growth will have weighed on consumer spending in the quarter. Preliminary data suggest this is likely to pick up a little, but continue to show only modest growth, the report added.

The Q2 GDP data is somewhat dated. The second half of the year should see much better consumer spending reflecting the stimulus coming from lower interest rates and tax refunds. Rising house prices may also have an impact.

But the Q2 GDP report is likely to show that the starting point was lower than the RBA expected. And the Bank’s concerns over the international backdrop would only have risen since the August meeting.

"While the RBA looks likely to keep rates on hold at its board meeting today, we expect a follow up cut in coming months. Our view is that the GDP data will likely confirm the Bank’s thinking that the economy needs some extra stimulus to run faster, to push the unemployment rate down, and eventually generate inflation closer to the target," ANZ Research further commented in the report.