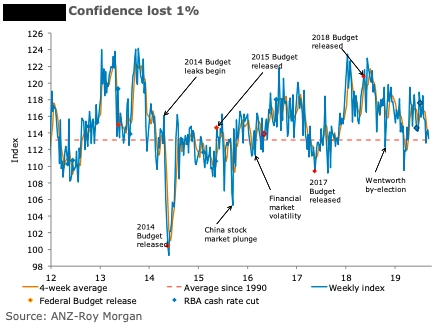 Australia’s ANZ-Roy Morgan Australian Consumer Confidence fell 1.0% last week. The fall was accentuated by a sharp decline of 7.1 percent seen in the ‘Time to buy a major household item’ sub-index.

Current finances fell by 1.2 percent, the second decline in a row, while future finances gained 1.7 percent. Both the indices are well above their long term averages.

Australians are still wary of the economic outlook considering both the sub-indices are below their long terms averages. Inflation expectations were stable at 4 percent on the four-week moving average.

"A steep fall in the ‘Time to buy a major household item’ led to a decline in the overall confidence index to just above its long-run average. This sub-index fell to its lowest level since April and is well below average. It seems that tax cuts, lower interest rates and the associated turn in the housing market are not yet motivating people to consider a major household purchase. Interestingly, sentiment toward the economic outlook improved despite the weak Q2 GDP report. In saying this, we need to be mindful that sentiment toward the current economic outlook had declined for five consecutive weeks to its lowest level in more than two years. So the bounce in this sub-index is only modest," said David Plank, ANZ’s Head of Australian Economics.