Why the Kavanaugh hearings were a show trial gone bad 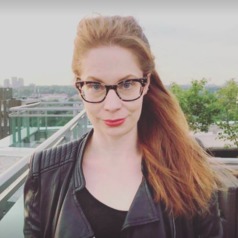 The controversial and bitterly fought confirmation of Judge Brett Kavanaugh’s nomination to the Supreme Court has solidified a 5-4 conservative split on the highest court in the United States that is likely to persist for decades.

More important, however, is how the confirmation process revealed — and exacerbated — the polarization of the current U.S. political landscape. During the hearings, Republicans and Democrats alike used the law as both a cover for and tool of party politics.

That the law is political should neither surprise nor disturb us. What we should be concerned about is the failure of the left to mobilize itself around a law-as-politics strategy that can actually succeed.

The Kavanaugh confirmation hearings will be remembered mostly for the testimony of Dr. Christine Blasey Ford, who alleged that Kavanaugh sexually assaulted her during the summer of 1982 when he was 17 years old and she 15.

For their part, Republicans accused Democrats of holding onto “secret” evidence only to spring it on Kavanaugh at the last minute in order to obstruct the nomination — all in the hope that the Democrats might take the Senate in the November midterm elections. Kavanaugh himself referred to the whole episode as a “calculated and orchestrated political hit.”

Democrats, on the other hand, attempted to combine the momentum of the #MeToo movement with distrust by progressives of Kavanaugh’s position on reproductive rights to generate enough rage to convince moderate Republican senators like Susan Collins and Lisa Murkowski to vote against their party. (In the end, neither did and Kavanaugh was confirmed by a 50-48 vote in the Senate.) 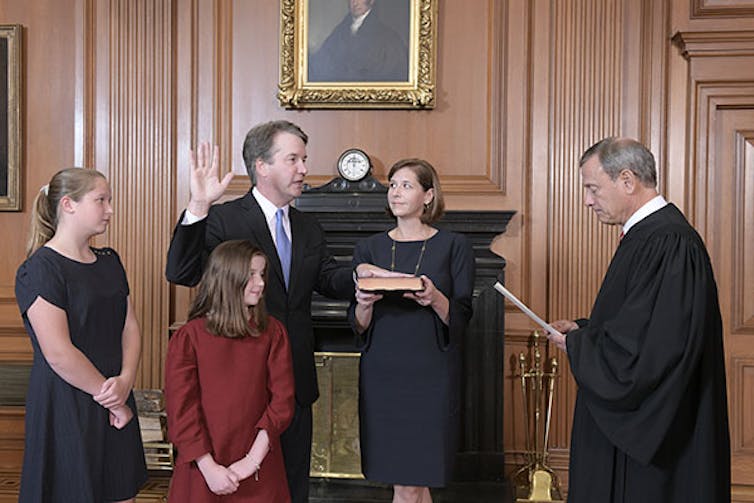 New Supreme Court Justice Brett Kavanaugh is surrounded by his family while being sworn in by Chief Justice John Roberts. The ceremony took place just hours after a bitterly contested confirmation vote in the U.S. Senate. Fred Schilling, Collection of the Supreme Court of the United States

Lost in the emotional debate was a needed focus on Kavanaugh’s damning record on consumer and labour rights, environmental protection, health care, Indigenous rights and possible involvement in the commission of international crimes — including torture — during his time in the George W. Bush administration.

The Democrats’ strategy was to effectively put Kavanaugh on trial for the issue most likely to appeal to senators on a bipartisan basis: sexual assault.

Both sides of the aisle invoked legal ideals of fair process, impartial investigation and independent decision making. Although Republicans and Democrats held very different notions of what these ideals would mean, concretely, in the context of Ford’s allegations, both parties remained committed in the abstract to “finding the truth.”

Confirmation hearings, however, are emphatically not legal proceedings. Unlike judges and juries, the senators are not fact finders. Perhaps counter-intuitively, whether Ford’s allegations are true was immaterial to the senators’ task, which was to provide “advice and consent” to President Donald Trump on Kavanaugh’s appointment.

The U.S. Constitution does not provide guidance on how the Senate committee should carry out its work, including which information it should seek and how it should consider this information. No substantive qualifications are provided for: technically, the Senate could confirm a justice who doesn’t even have a law degree.

Turning the hearings into a trial-like event, however, allowed the Democrats to wield the supposed neutrality of the law against Kavanaugh’s obvious partisanship.

All the talk, on both sides of the aisle, about the rule of law, fair process, impartial investigation, corroboration and credibility — ideals that are supposed to ground the “rule of law” — was calculated to create the impression that the Senators were bound, in fact, to apply some standard of proof in assessing Ford’s allegations.

When Kavanaugh claimed the hearings were a sham, he was not wrong. Democrats and small-l liberals argued the hearings were essentially a job interview and that Ford’s allegations were sufficiently credible to conclude, most strongly, that Kavanaugh assaulted her or, most weakly, to raise serious doubt about his suitability for a position on the Supreme Court.

However, job interviews, even for the most important positions of public service, do not typically provide highly legalized settings in which to publicly litigate the political future of a country.

But let us be clear that the pageantry of the “rule of law” — emphasized so strongly by Democratic Sen. Richard Blumenthal during the confirmation hearings — works to obscure the way in which this nomination process actually set the stage for further entrenchment of the partisan divide that liberals bemoan.

As uncomfortable as it might be for Democrats to admit, the Ford testimony was a show trial — and a poorly handled one at that. In the words of theorist Judith Shklar, show trials are designed to eliminate political enemies. They pursue “the destruction, or at least the disgrace and disrepute, of a political opponent.”

We tend to talk about show trials as though they are necessarily a bad thing. For Shklar, domestic political trials could be useful; what mattered was the specific sort of politics they advanced and that the whole process could be subsumed within the rhetorical limits of liberal legalism. In other words, the show trial should reaffirm the status quo of the existing constitutional structure, rather than challenge it.

Of course, these sorts of show trials only work when they are run by the party in power against perceived internal threats to the domestic political order.

The attempt to prevent Kavanaugh’s nomination failed because Democrats bet on the energy of #MeToo to supplement the power they actually held in the hope that they could destabilize the Republican Senate majority. This was a foolish wager.

The #MeToo movement is not a political movement. As a slogan and rallying cry it has galvanized an incredible amount of energy, affect — and profit — around enumerable policy projects, many of which are internally inconsistent. Furthermore, it is not clear that many of these policies are progressive or liberal in any discernible sense.

Let me be clear: I think Ford’s testimony was credible and needed to be heard. But Democrats made a strategic error in relying on it to disqualify a nominee who was already eminently objectionable to progressives on a host of other substantive and procedural issues.

In allowing Kavanaugh’s frankly frightening judicial record to be overshadowed by #MeToo, Democrats created a new and confusing battlefront on which Republicans all too easily capitalized. During the Ford testimony, deep partisan disagreement set in on the very issue to be decided; namely, the credibility of Ford’s allegations or Kavanaugh’s denials.

Overlaying the whole spectacle with highly legalized rhetoric accessible only to a certain professional class exacerbated the matter, sometimes colouring the Democrats with the same elitism that much of the public viscerally disdained in Kavanaugh.

Today, U.S. politics is divided in seemingly intractable ways and the stakes could not be higher. The impending midterms and 2020 presidential election will determine whether the American electorate will continue to willingly submit to Trumpism and its associated misogyny and mendacity, or will demand deep structural change in the Republic.

Writing in 1932, German legal theorist Carl Schmitt warned the “rule of law means nothing else than the legitimization of a specific status quo, the preservation of which interests particularly those whose political power or economic advantage would stabilize itself in this law.”

If nothing else, Kavanaugh’s confirmation teaches us that it is time to turn away from liberal fetishization of the law and toward concrete political action at the legislative level.